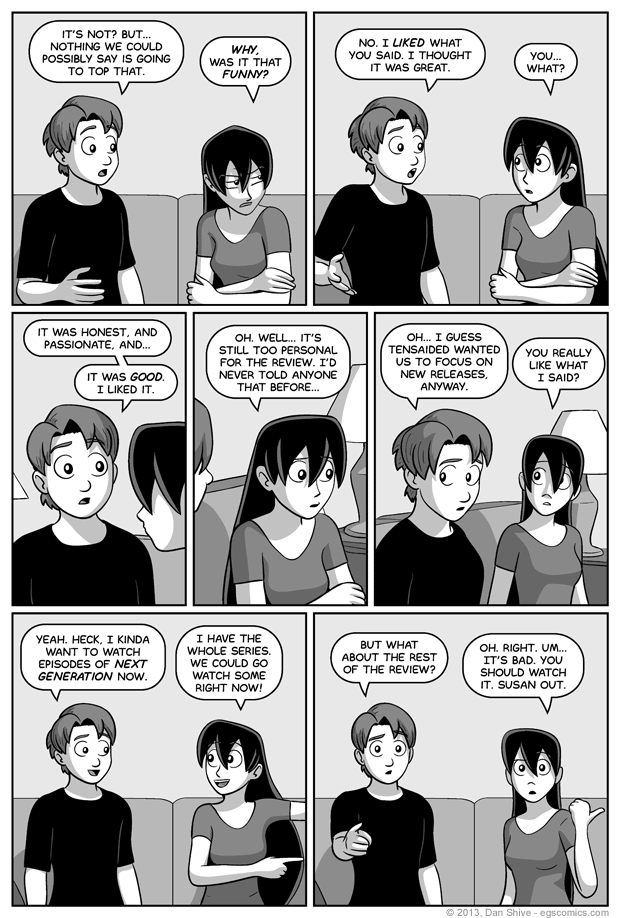 Posted January 18, 2013 at 1:00 am
Monday is El Goonish Shive's 11th anniversary. I'm not plotting any changes to the schedule, however, so there will be a story comic. I'm sure nothing fittingly significant will coincidentally happen in it.

Back to matters of the present, I suspect that while Elliot didn't regularly watch Star Trek: The Next Generation on his own, he has been best friends with Tedd for years and he's certainly had some exposure to reruns of it if only by virtue of that.

This comic ends the Sporkman movie review. Prior to settling on exactly what I wanted to do with it, I asked John Troutman to send me a potential synopsis for the movie. I didn't wind up using it, but it is good and it should be shared:

When the F.B.I. seeks to capture the renegade alien hero Sporkman (Joseph Gordon Levitt), his only ally is the tough-as-nails local reporter Amanda "Hot Press" Beaumont (Anne Hathaway). But while rooting out corruption at the Pentagon, Amanda's taken hostage by terrorists who plan to sink Virginia into the ocean by triggering artificial earthquakes across the state. Now the F.B.I. director (John Goodman) must form an uneasy alliance with the Sporkman before the terrorists destroy Amanda, the state of Virginia, and perhaps the universe itself.

Give Anne Hathaway a scene where she raps about sporks and I'm sold.