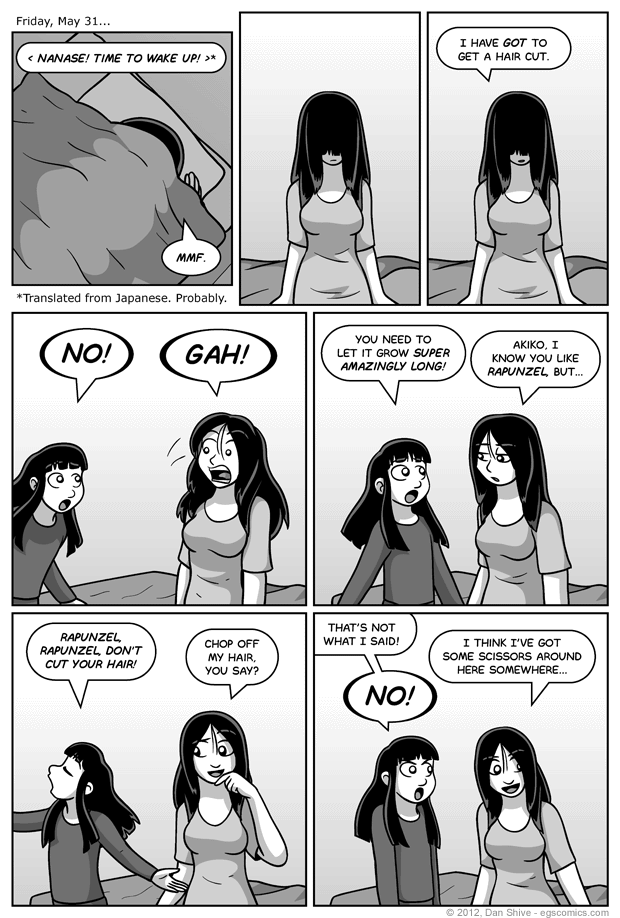 I've decided to go with the "relatively short story before the next long one" approach. While Death Sentence was floating around in my brain for several years, I literally came up with this storyline last Friday. It involves a subject that I've thought about addressing before, but I hadn't planned any sort of actual comic storyline around it prior to then.

This is a little more spontaneous than I'm used to, but what the heck, right? Plus, Akiko finally gets to do stuff! Fun fact: it turns out that she is, in fact, capable of speech.

Perhaps she's referring to THIS Rapunzel? Probably not, but hey, it's an excuse to link to that guest comic. I was originally just going to directly reference Tangled, because that movie is awesome and Akiko would love it, but meh. The point is Rapunzel and her long hair, not the Disney movie inspired by it (however awesome it may be).

Speaking of which, Tangled was originally going to be called Rapunzel, but they allegedly changed it for marketing reasons. There was some uproar over this (how much is difficult to tell, as everything causes uproars on the internet), but I really liked the different name. I thought it was fun, and It's not like their movies inspired by fairy tales ever closely follow the original material. I think it's more honest to just call it something else. It's like being upfront "yeah, we took inspiration from this, but we did our own thing with it" aspect of it.

That's less convenient for people who enjoy complaining about the differences, but don't worry. So long as nerd rage exists, no force on earth can stop complaining on the internet. Except maybe an electromagnetic pulse of sufficient magnitude to wipe out the entirety of the internet. That might do the trick.