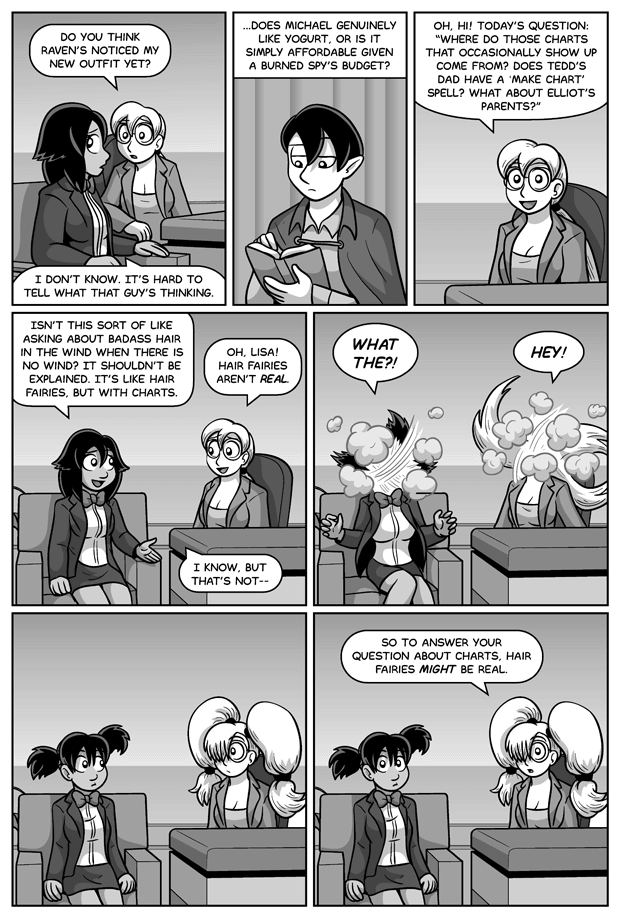 This question is very common. So common, in fact, that I received at least three separate e-mails about it! I assume that for every question I get e-mail about, 1,000 people have the same question, so if you really think about it, it's like 10 million people asked this question!

In the end, however, I consider answering this question similar to answering where Elliot's keys went. I could certainly come up with an explanation and make it official canon, but would that really be better than leaving it ambiguous?

In all honesty, I mostly decided to "answer" this question when it occurred to me that it was an opportunity to draw a comic with bad eighties hair, because bad eighties hair is totally rad. I don't think their hair is quite eighties enough, however. Their hair became awesome and possibly tubular, sure, but is it cowabunga-tubular? No. No it's not.

It's entirely possibly that the remainder of this Q&A will be devoted to mastering the art of 80s fashion.

EDIT: CRAP! Forgot to mention Burn Notice! ...So, yeah. That's a Burn Notice reference in panel two. And it's something I wonder about.

Speaking of hair, what is up with Jeffrey Donovan's hair this season? Seriously. I can't concentrate on the intrigue and espionage because I keep looking at his hair. It's just... no. Hair fail. One of his cover stories needs to call for a hair cut as soon as possible.