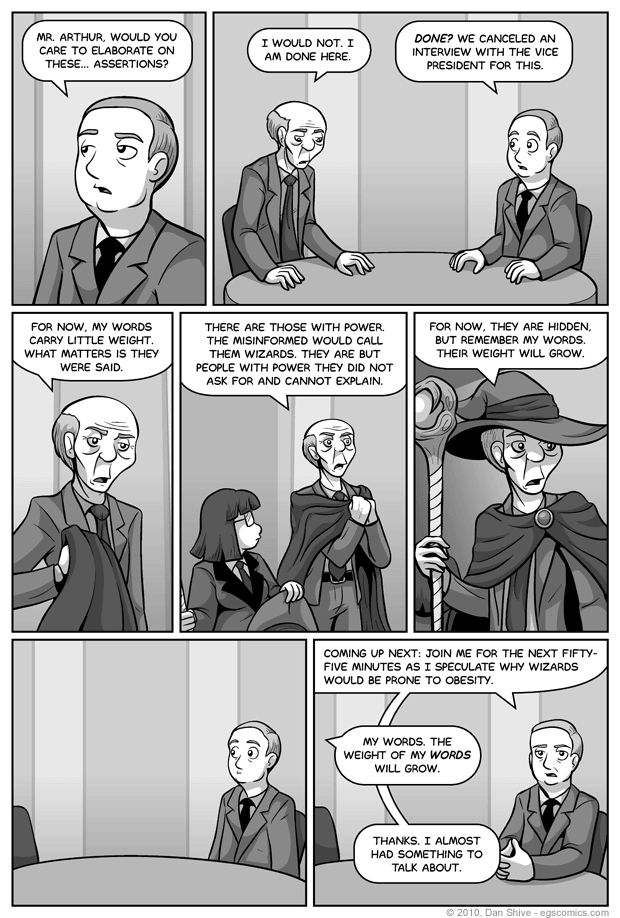 Posted December 3, 2010 at 1:00 am
And thus, this comics reveals Arthur's master plan: the right to say "first!" when everyone else inevitably starts agreeing with him.

Also, based on his outfit, I think there's a slight possibility he may very well be some manner of bard. I think that's a lute he's holding in panel five. It has no strings, but that's probably why he's in a hurry to leave. He's going to be disappointed. It's no doubt getting late, and music stores don't stay open forever.

When an interviewer claims they canceled an alternative interview for someone, comedic law demands it be someone with a ridiculous amount of clout. The first job title that popped into my head was pope, but that was most likely due to having heard that joke before. Vice president is essentially the same joke, but slightly less absurd and possibly less blasphemous.

Every so often, I discover a punchline born out of what's initially seen as something that needs to be edited. I was taking a break from deciding how the interviewer would try to fill the remaining time on his program when I realized it was possible to misinterpret Arthur's dialogue. The rest wrote itself.

It actually is a question worth considering, although we'd hardly be the first to do so. Many have speculated that wizards would naturally be overweight on account of them using their magic to take care of things that would otherwise require physical labor. Short of going overboard with magic to the point of burning off extra calories, that is something that could potentially happen with someone using the EGS magic system.