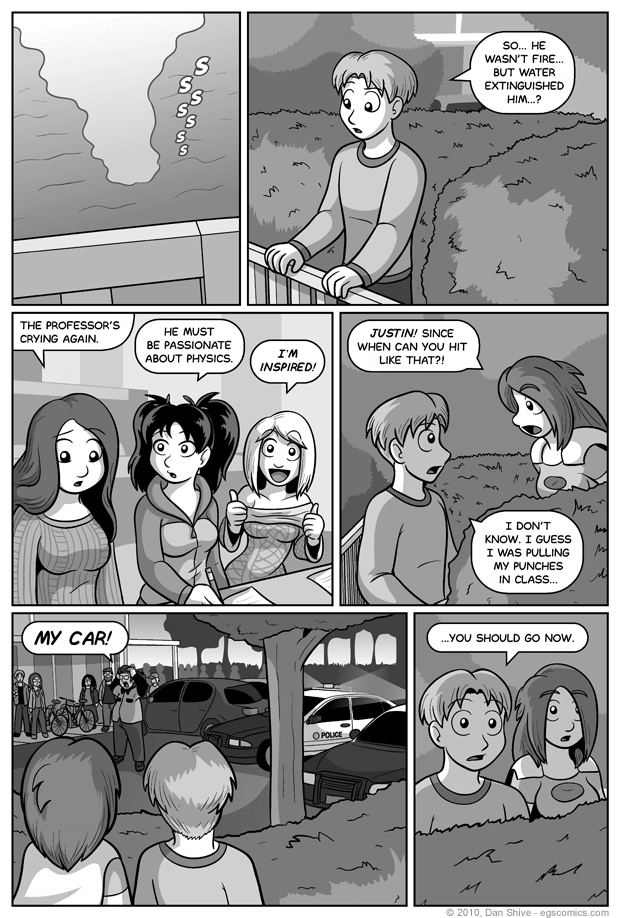 Posted October 11, 2010 at 1:00 am
Feel free to give yourself a cookie if you guessed whose car was being abused (and in case he's too small in panel five for you, that's George saying "my car!")

As for panel three, don't worry; I don't plan to abuse the crying physics professor gag. I like it, but unless there's a new spin on it to twist, we're not going to keep cutting back to that lecture hall.

Speaking of which, I was hoping to include a Dalek sketch on the original cute physics student's paper as an inside joke for people who read the commentary, but the image was so small that it may as well of been the robot from Lost in Space. Or, you know, a smudge.

I confess to not being great at drawing bushes, particularly untended to bushes. You think anyone in that comic shop is maintaining those things? Heck no. It's shocking that there's still a parking lot to park in with the way those things are likely untended to, and yet they seem pretty uniformly cut. Maybe there's some sort of groundskeeper for that general shopping area?

Yeah, let's go with that. Heck, he can be a new character! I'll call him Groundskeeper Billy. He'll be Scottish and 100% original in every way.