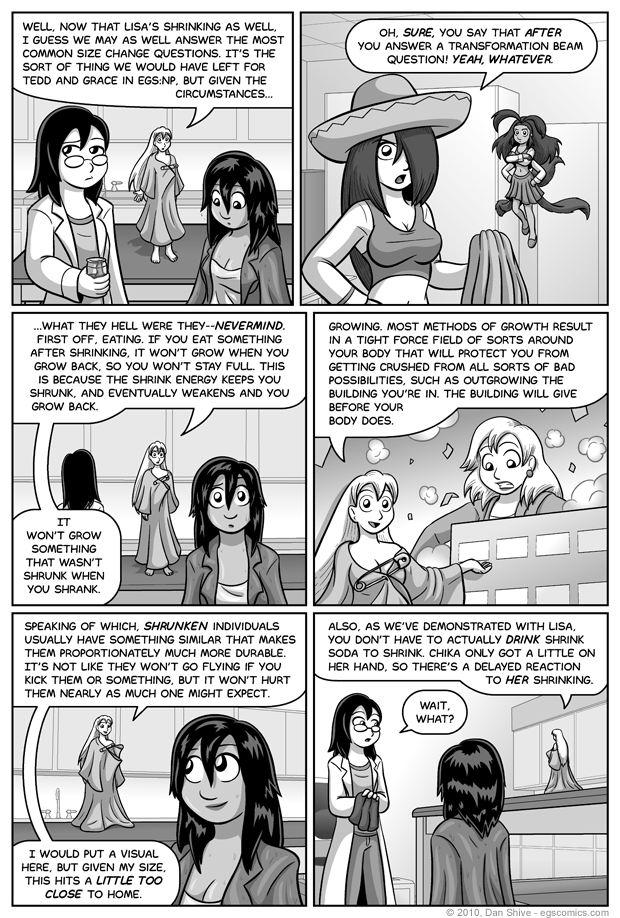 Posted February 11, 2010 at 1:00 am
An obligation to work ahead and the desire to set up the last panel resulted in this and the previous comic diving into transformation questions, which I had originally planned to reserve for Tedd and Grace in EGS:NP. Finding it difficult to avoid huge massive spoilers the size of tyrannosaur gorillas while still answering real fan questions, however, I've given in to addressing transformation based questions here.

That said, whether you have to drink the shrink soda and what happens when you eat something while shrunk (the latter being the most common shrink-based question I've gotten) are the two real fan-sent questions in this comic. The protection while growing and when shrunk are just two things I've wanted to introduce as canon for a while and snagged this opportunity, so those are more "fun facts" than actual answers to sent questions.

That's Carol the news reporter in panel four. I was originally plotting to imply that she had grown out of her clothes, but I decided there was already enough of that sort of thing going on in this Q&A so clothed she is.

Amanda goes from 32% to 15% during this comic, so she's almost done shrinking.