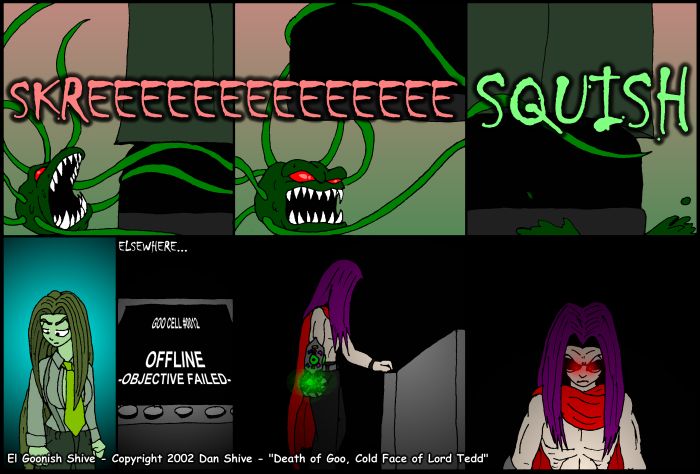 Skree translation - "NOTHING IS OVER! JUST GET ME SOMETHING TO DRI--" *SQUISH*

Anyone remember that commercial? It featured a claymation Rocky in the boxing ring, and it was rad. At least, I think that was a commercial that existed. I can't find it on the YouTubes (EDIT: People has since found it), which basically makes the credibility of my claim less than that of Bigfoot existing. I hope it was a real commercial, otherwise there's no real reason I automatically hear Rocky saying "just get me something to drink" whenever anyone says "nothing is over".

Of course, for all I know, that line was actually in a Rocky movie and simply adapted for some commercial / bizarre daydream I once had. I should at least watch the first one one of these days.

In any case, I guess I just established that the goo sounds like Rocky. This is probably not canon, but feel free to imagine it sounding that way.

What else... Oh, right! Lord Tedd! That guy! I'm sure he'll be frequently seen all over the place.