At the bottom of this commentary is an overlapped combination of panels one and three, making it easier to tell the differences, and below that is a list of the differences.

Just letting you know so you can try to spot the differences without its help first.

In The Legend of Zelda: Wind Waker, there is a stealth segment in which you can grab barrels, carry them over your head, and hide under when you stop moving. If the enemies spot the barrel while you're moving under it, however, they catch you.

This barrel-based stealth is something I've commonly seen made fun of, and there's of course the box variant in Metal Gear games. Recently, however, it occurred to me that "wait a tick... CHANGE BLINDNESS!"

And all of a sudden, the absurdity of just carrying around something you hide under became relatively less absurd, and I had to tell the world. I almost did this via a tweet before realizing this was a near perfect opportunity to have a "spot the differences" panel again.

And to make fun of Skyrim.

Seriously, someone with a fresh arrow literally sticking out of their chest can conclude they must have been hearing things and go back to whatever their doing if you sit quietly in the shadows long enough. Relative to that, hiding under a barrel is 100% realistic.

OF COURSE, however, there are things one can nitpick. For example, pigs have good senses of smell, and the enemies are pig based. Also, the sound of dropping the barrel, and the fact that change blindness wouldn't cover actually bumping into a barrel that's never been there before while on patrol.

RELATIVELY SPEAKING, however, Wind Waker's stealth actually makes sense, and that astonished me. 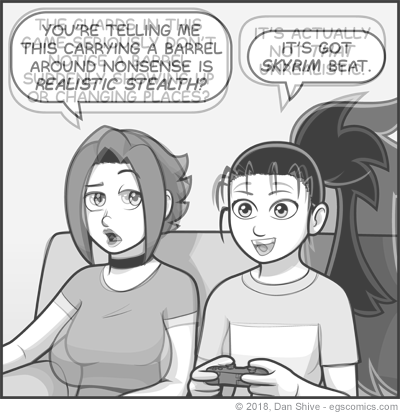 The differences (aside from expressions and dialogue):