And because the text in the first panel is a meanie: 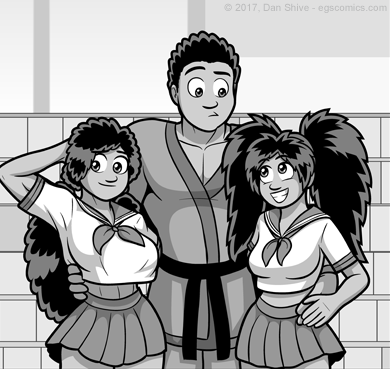 Now I REALLY don't know who the real Greg is, though I'm starting to suspect the one on our right with pointier hair might actually be Dex.

I had intended for today's comic to address the Double FV5 anyway, but I wasn't sure what to do for it. At the same time, some people were confused as to why Greg being smaller required more effort (the logic apparently being that "more power" must equal "larger measurements").

And after deciding the best way to show off Double FV5 was to have something to compare it to, this comic became simple to write. I wound up fussing over how exactly Double FV5 would work, however, so it didn't go as quickly to draw as I would've liked. 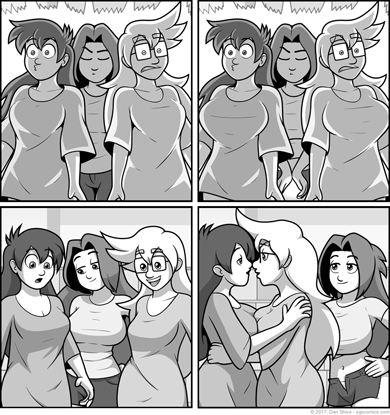 I didn't realize until after I'd put that together, but if you ignore either the upper right or lower left panel in the above comparison, there's a bit of a narrative to it.

Incidentally, yes. Without text in the way, we can see that the button popped off Ellen's shorts, and the seams on the side split. FV5 is hippy enough, but double FV5? Given that magic will make it so clothes (and buildings) will lose any battle with someone growing, such a thing was bound to happen (and yet another reason why we haven't seen her flaunt Double FV5 in story comics in spite of these spells being canon).