Once I had settled on the game officially being Chrono Trigger and the subject of naming characters, this had to happen. It HAD to!

Heck, Tedd gets compared to a lot of other fictional characters. This sort of thing might come up again.

Of course, there's another elephant in the room, and that elephant is the fact that the sprite that introduces Lucca doesn't show her purple hair: 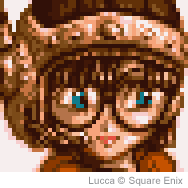 Lucca's character sprite does have purple hair, however, and the resemblance does exist.

In any case, EGS is a magical alternate universe with magic and alien squirrel hybrids and stuff. Maybe the sprite people in their universe figured out how to get some purple highlights in that first sprite.

I did not have Lucca, or anyone else, really, in mind when designing Tedd. Tedd was originally going to have black hair (which I actually have hard evidence of now on Twitter), and his glasses were round because back then, I considered "round" and "square" to be the two choices for drawing glasses. As I've said before, his hair wound up purple when I realized I had NO idea how to draw long black hair without it just looking like a big blob.