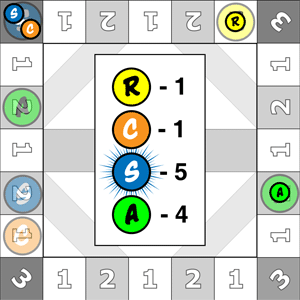 I take no issue with anyone who dislikes how "animated" the last panel is, but I originally sketched Susan in a muss less "animated" fashion, and there was just no energy to the image whatsoever, no sense of impact to accompany this sudden transformation. I'm not going to claim that's the only reason I decided to draw it that way, but I do feel that would have been reason enough.

"Swap" does exactly what it sounds like to start, but the player using it can buy the space they're on if they get an equal to or greater number of form types in the exchange.

Truth be told, one of the reasons I did the cliffhanger without mentioning "swap" was I didn't want people to guess that it would result in a complete body swap. Just the forms in play get swapped, as I hope is apparent.

What's probably ALSO apparent is that the +1 Attract effects and ditzy escalation were included in the swapping.

I mean, probably. There are a couple of clues.

Sidenote: When I first posted the previous comic, it said Ashley moved eleven spaces. This was later changed to twelve, and some of the dialogue changed to reflect that Ashley would have had to have rolled doubles to get Twelve. The full story on that can be found in the previous comic's commenteary, but I'm mentioning it here for people who saw it right around when it went up, and didn't look again later.