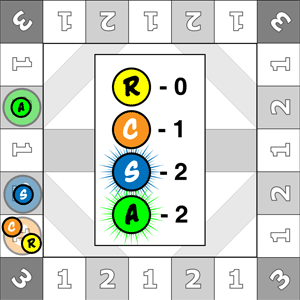 Again, I swear I didn’t stack the deck. If I had, I would’ve spaced out some of the Physical cards with these, um, “stacking” attributes. Not even close to all Physical cards affect that same area.

But hey, at least we’re finally going to talk about what Attract does! We’re not going to actually see it accomplish anything game-wise right away, because what it actually does is make players move in the direction of the player with the highest “Attract” value for them, and Ashley rolled higher than everyone else on her first turn, so everyone after her is going to move in the same direction they would’ve anyway, but STILL!

Incidentally, if a cat form was in play, it would be repelled by Rhoda’s dog form (move away from Rhoda), and Rhoda would be attracted to the cat form (move towards that player).

The intent of the pattern behind Ashley is a bunch of cow heads, which... Well, it’s super obvious to me, but I made them. I can easily see someone looking at one of the ones angled with the horns downward and thinking it’s some manner of “who’s that Pokémon” silhouette situation.

The cow form changes more than what’s immediately obvious. Ashley is all around bigger in this form, which will be more apparent when we see her player piece / her from other angles.

I intended for panel two to work as a decent “before” indication of this increase in volume, but I don’t think it’s a hundred percent successful in that regard. It could have done a better job if panel two had a matching dramatic angle to panel three, but that would be blasphemy