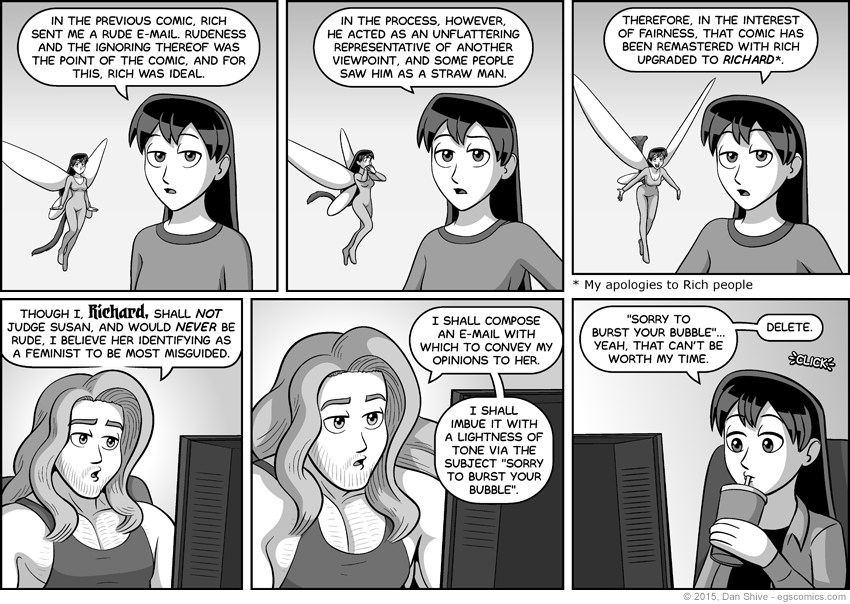 When someone looks at a character of mine with a particular viewpoint behaving a certain way and reaches the conclusion that I am saying all people with that viewpoint are like that, I reach a conclusion of my own: That that person really does not know me very well.

Richard is a gentleman and a scholar, though for some reason, he associates the word "feminism" with negative things. Sadly, Susan deleted the e-mail, so we'll never know what those reasons are.

I believe word "feminism", and indeed, most words people would use, or not use, to describe themselves are effectively double-edged, and that's because the meaning of those words are ultimately personal while nonetheless being used to generalize.

Oh sure, you can quote whatever dictionary is handy, argue the history of a word, etc., but there isn't a singular "feminist" organization. People aren't given "gamer" membership cards once they've proven they've met some vague qualifications. No angel descends from the heavens to say "sick music, brah" and declare someone a "musician" (at least, I assume that hasn't happened).

A person who identifies as a feminist may do so because they find the actions of many past feminists inspiring, and it gives them courage to fight for gender equality. Perhaps it lets them know they're not alone, and that there are others who feel as they do.

And maybe there are those who associate the word with women controlling men, and many of them really wouldn't get along with those who identify with my first example.

Personally, I grew up in such a way that I now associate feminism with good things, and I would love to argue that feminism is all about equality and is totally rad. Given my beliefs regarding personal meaning, however, I can't really blame someone for not embracing the word if they somehow associate it with negative things, particularly if they're genuinely for gender equality and simply embrace other words that mean to them what feminism means to me.

I may take issue with their interpretation, but I don't feel there's much to be gained insisting that they call themselves feminists if it doesn't have that personal meaning for them.

And so on, and so forth.

Anyway, RICHARD! Yeah. I have a whole 'nother topic after that last mouthful. Don't worry, it's brief.

Richard's not smiling about his "amusing" subject choice in panel two because, supposedly, men are less attractive when they smile? I'm eager to hear responses to THAT assertion, but I gave him perpetually somewhat pouty lips instead. I've also read that men with subtle beards (practically stubble) are commonly thought of as attractive. I know at least one woman who'll disagree with that and demand Richard be given a full thick beard, but that's what I went with.

As for his hairstyle, that would be my personal preferences at work. I want hair like that, darn it.