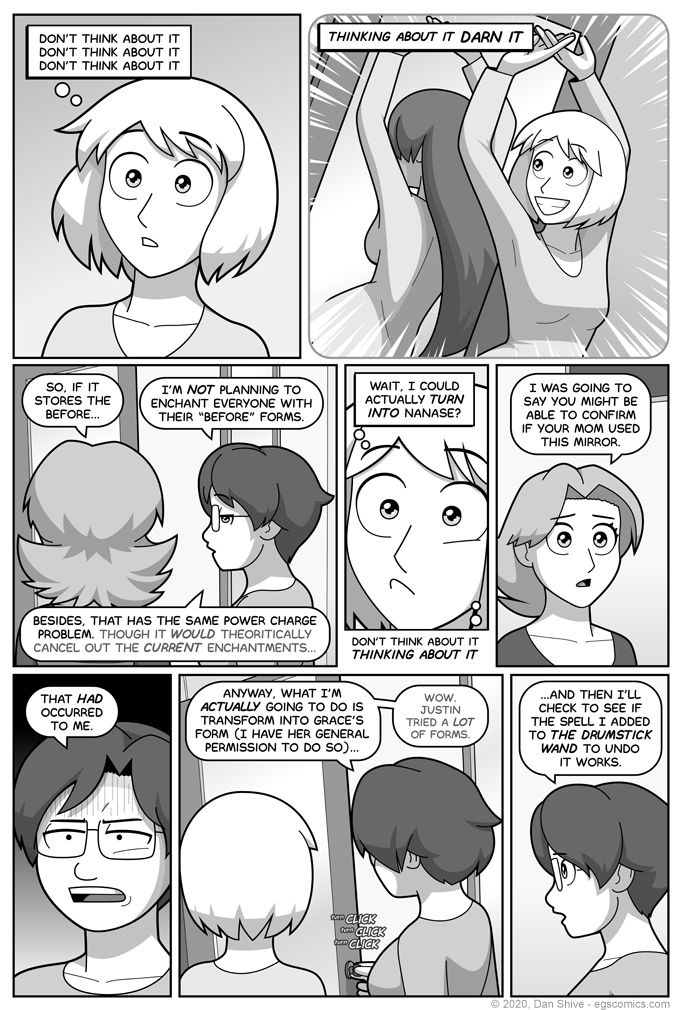 Tedd's solution is a lot like watching anime on your phone after your TV unexpectedly implodes. You're sort of doing the same thing, just not on a big screen.

Was that analogy forced? It felt a little forced.

Also, what do you mean you've never had a TV implode? That seems to be all mine do.

Anyway, transforming people with their "before" forms via the mirror would sort of solve the problem? Their current transformations would be canceled out, and they'd technically still be transformed, but they wouldn't LOOK transformed?

There's potential weirdness with such an approach. Like I'm not 100% sure what the duration of such an enchantment would be given that they'd perceive it as not being changed?

Maybe the neutrality of it all would allow natural resistance to do its thing, or maybe they'd accept it to the point that the enchantments would be prolonged indefinitely? Would there be any tangible consequences to being in an enchantment identical to your default form long enough for the enchantment to potentially become permanent?

It's probably for the best that the mirror isn't charged up enough and Tedd has a different solution.

I actually drew Diane in the second to last panel by mistake, so if you're wondering "why did Diane move in close there", it's because, um... Quantum irregularities? This was a mistake I noticed so late in the process with so little consequence (Susan and Diane are both roughly in that same location) that I decided to leave it. Whatever. They're pacing around a bit while Tedd does stuff. IT'S FINE.

Incidentally, I considered having Diane be weirded out by the prospect of looking like Nanase giving all the New Years Eve nonsense, buuuuuuut I decided she would be mercifully too distracted by OTHER feelings and thoughts to get caught up on that.