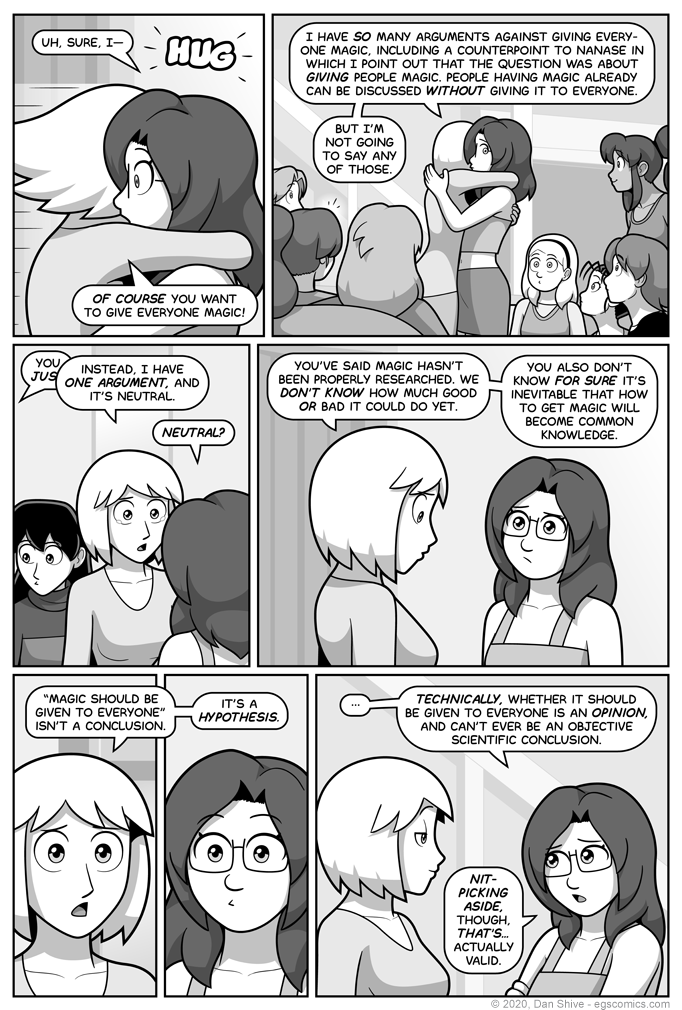 I like panel two for a few reasons. For one, some of the counterpoints given to Diane seemed to be about admitting magic was a thing in general when the actual thing being debated was giving everyone magic (which I feel is the sort of thing that happens at some point in most debates).

For two, I like Diane being mildly jerkish even when trying to do good.

For the sake of my weekend, I'm going to point out that this is NOT Tedd effectively saying "you're right, I was wrong, I no longer want to give everyone magic."

What's being referenced here is the scientific method. A scientist is allowed to think they're going to get a result, but they're supposed to proceed in ways that eliminate bias from the data, and be willing to accept a different conclusion if it turns out one's hypothesis was incorrect.

That's pretty simplified and coming from someone didn't have any education in science past high school (unless Mythbusters counts), so mayhaps my description shall be nitpicked, but the idea is that Tedd should to be open to the possibility of being mistaken should evidence suggest that after they've done more research.

Being open to the possibility of being wrong might seem like a lapse in faith to some, but Tedd believes in SCIENCE!, which, contrary to how it's presented at times, isn't about being know-it-alls who think they know everything. Heck, if they DID know everything, they wouldn't need science. That's what it's for.

If I may quote CSI, a show I'm usually not that fond of but could be good, "I'm wrong all the time. It's how I eventually get to right."