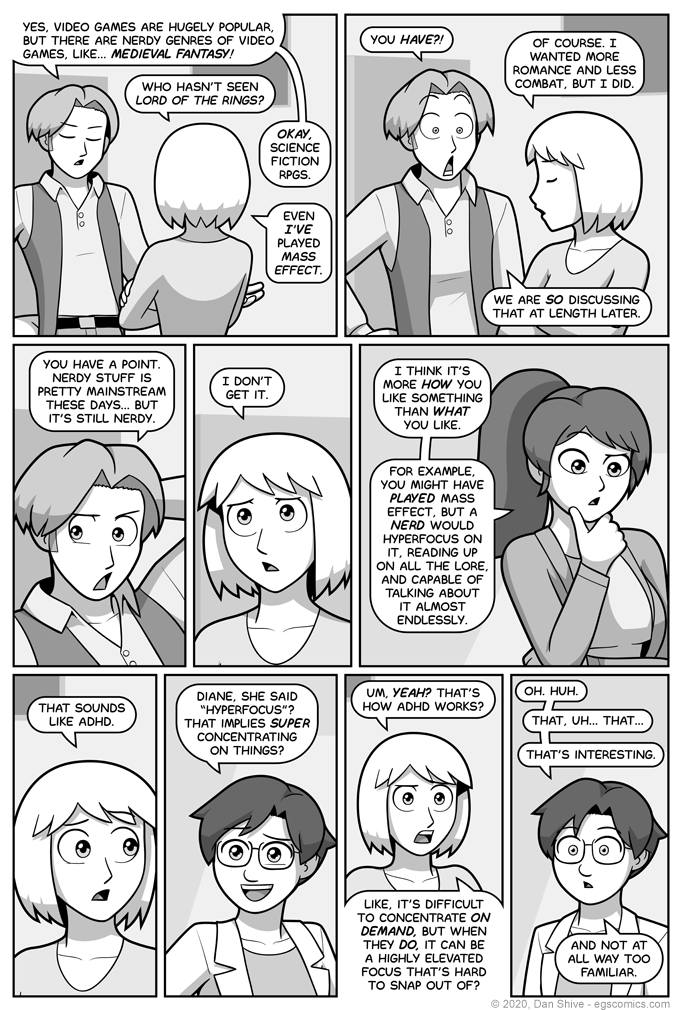 Diane's not trying to be a jerk about this, but it's easy to come off as one when SO CONFUSED OMG WHAT EVEN IS NERD

Back in 2011, and without any actual awareness of ADHD, I wrote a story with heavy autobiographical inspiration called One Way Road. It was about Tedd having relationship issues as a result of basically what Diane is describing in the second to last panel.

October of last year, over eight years later, and responding to people suggesting I have ADHD, I said the following on Twitter:

"Some have theorized that I could have ADHD, but that can't be true (Looks up)

Ha! The only "H" bits that apply to me are the ones about fidgeting and having trouble staying in a seat and such!

Literally everything here about being inattentive applied to me in school, but still!

I was very quickly made aware that I had basically just described ADHD, and that I didn't actually know what ADHD was. I soon found myself answering "yes" to almost everything on a "do you have ADHD" checklist, the only thing I didn't say yes to being "frequently interrupts others", because I take extra care not to. Stories people shared of their experiences with ADHD turned out to be among the most relatable, and eerily familiar, things I had ever heard.

So that happened. It was very different from past experiences with thinking something might apply to me, because instead of "this could explain a few things", it was "this would basically explain everything I was wondering about, including how my education went".

I haven't gotten a professional diagnosis. I'm not sure if I will. I am of the belief that I either have it, or some conglomeration of other conditions that add up to a zebra that matches the symptoms. Either way, advice intended for it has been helpful to me.

In any case, after these realizations, including the realization of what I'd done with the One Way Road story (and what I've continued to do with Tedd), I think of Tedd as having ADHD.

EDIT and sidenote: That initial tweet was after briefly skimming descriptions that weren't very clear about anything. Based on that, I thought the "H" didn't apply to me. Further reading, and hearing from people with ADHD, however, clarified things.