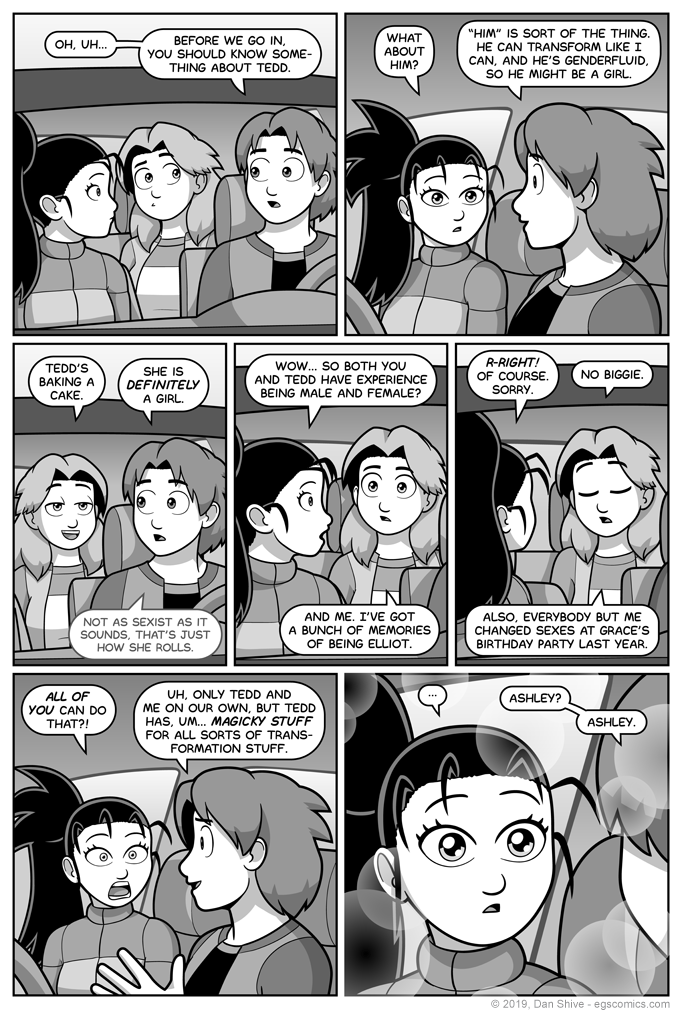 - Ashley did find out about Ellen

Anyway, yay, they can get out of the darn car now.

Wait, was that cool?

I'm honestly not sure if I should be scolding Elliot for telling Ashley this. I mean, sure, it might be better to let Ashley know, and Elliot knows Ashley's more than okay with it, and there's, like, zero doubt Ashley was going to find out anyway, and no doubt that Tedd wouldn't try to hide it from her, but my gut reaction to this sort of thing is "GASP, that's Tedd's business to share or not share".

I mean, my gut knows a thing or two, but it's not ALWAYS right, so I dunno. Under the circumstances, probably fine, but my gut's growing.

Or maybe it just wants a cookie. I don't know.

EDIT: Also, yeah, Tedd could've given permission in advance, but we didn't see that happen, so that's in the hands of personal head canon now! ...Unless I establish it on-panel later, though I'm not sure how it would come up.

The TF Gun and other assorted magic stuff

Ashley DID hear about the TF gun, but it was only briefly mentioned by Magus, and she's been distracted by other thoughts since then.

I thought about having her recall having heard about the TF gun before here, but it was such a brief moment that I felt a "TF gun..." thought bubble would mostly be confusing for more readers than not (I don't expect y'all to have the archives memorized, darn it).

As such, please act surprised when she does mention the TF gun at a moment in which the timing allows for her to elaborate on when she heard about it, 'kay thanks.