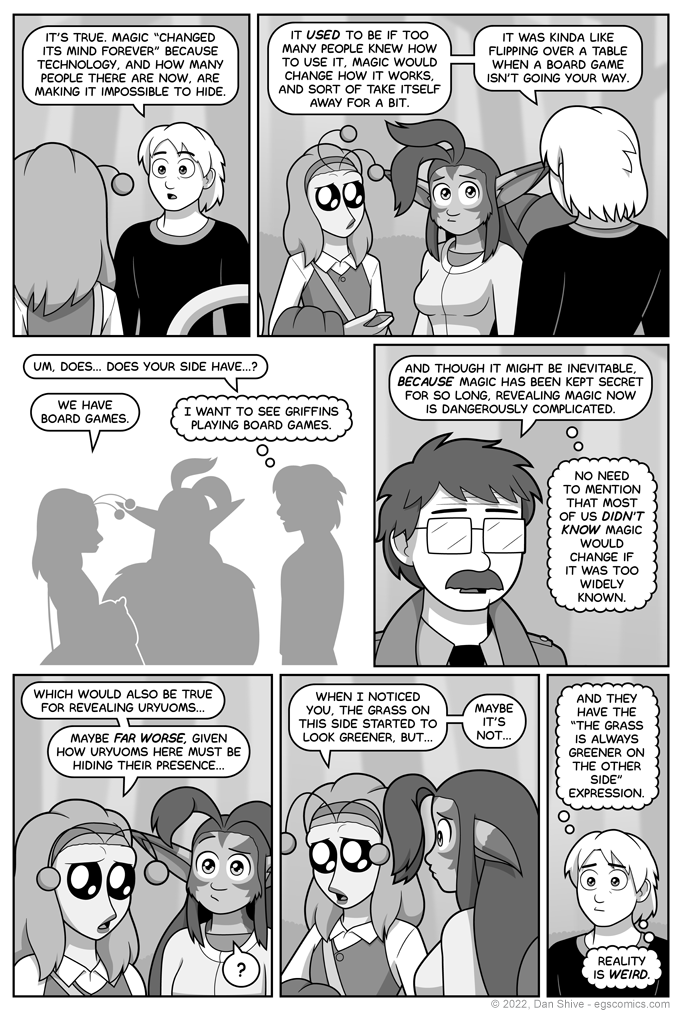 Off-panel, Andrea's struggle to not rudely interrupt with a thousand questions rages on.

The argument that they couldn't reveal magic because it would change is somewhat undermined by most of them having no idea that would happen, yes.

GRANTED, the decision to keep it secret, and the efforts to do so, would have been decided long ago. It's entirely possible the people who got the ball rolling on the whole secrecy thing did know that, but motivated their minions with talk of keeping people safe.

They very well might not have wanted their minions knowing about a secret reset button on magic.

This could also explain how the heck Arthur found knowledge of it, but given this comic, it's entirely possible a random talking pigeon passed on the information. Was the pigeon an immortal in disguise? A transformed wizard from a secret organization? Just some pigeon?

Moot point, there was no pigeon, but something like that totally could have happened without it feeling out of place.

The Greenness of Grass

Elliot is choosing to focus on the absurdity of reality rather than the sadness.

That, or that last observation was just one of those thoughts that's going to pop into one's brain regardless of whether the timing is appropriate.

THAT, or I really wanted Virginia to comment on grass being greener, and felt compelled to include someone thinking "huh, that's weird".

And in fairness to Elliot, part of Grace's brain is noting that absurdity. It's just not at the front of her mind.