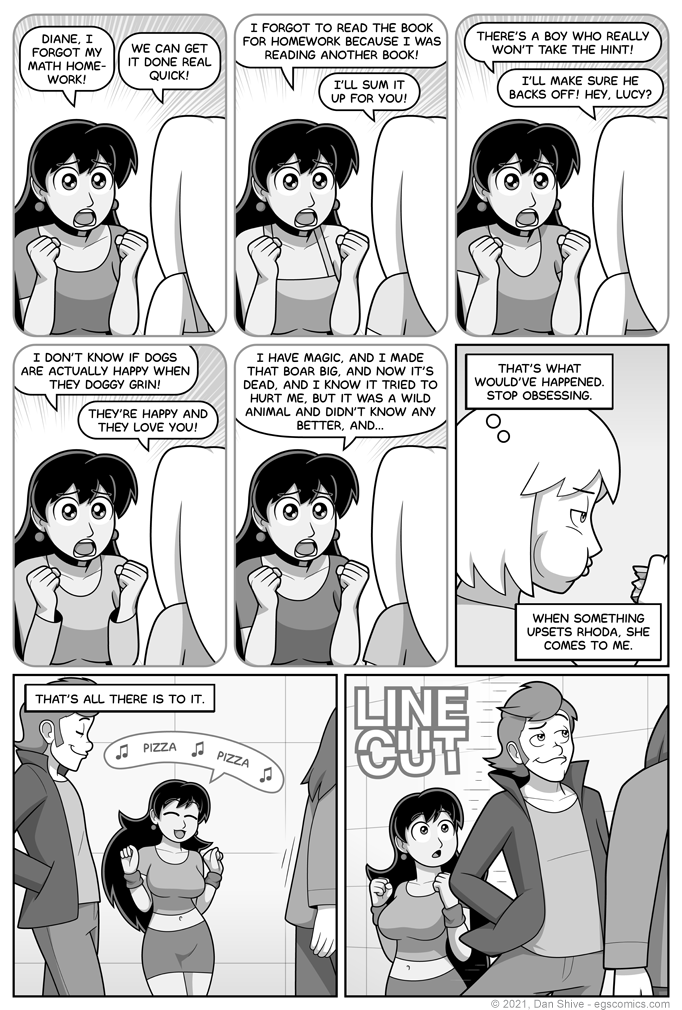 EDIT - Made it slightly more obvious that the guy in front of Rhoda only just walked forward, making that gap for the guy to slide into. This was mostly done with movement lines.

What, you think the narration saying Rhoda was off on her own to get pizza was just for world building?

HECK NO! CHEKHOV'S PIZZA, Y'ALL!

Part of me wanted to say "Chekhov's pizza, baby" there, but that's sorta weird, y'know? Like, from a slang perspective, it works, there's a reason it came to mind, but who knows who I'd be calling a baby?

I wanted a lot of examples of Rhoda acting like this with Diane, which meant four examples (the fifth "example" is separate because it's entirely imagined)

Humans are weird about the number three, and three is just the right amount for something to establish something as a pattern. Two isn't good enough, and four feels excessive. Given that I was going for excessive, four won.

Or maybe I just couldn't decide which of those examples to cut given that there's something I like about every one of them.

Rhoda has a history of trouble with math, I like Rhoda forgetting to read a book she was assigned because she was reading another book for fun, I like Diane saying "hey, Lucy", and the dog one was actually the first example I thought of and is obviously the best.

Which, really, is the truth of it. I wanted to keep four. That said, I stand by what I said about the rule of three, and how if you want something to be intentionally excessive, go over three. If you just want a pattern, three is good.