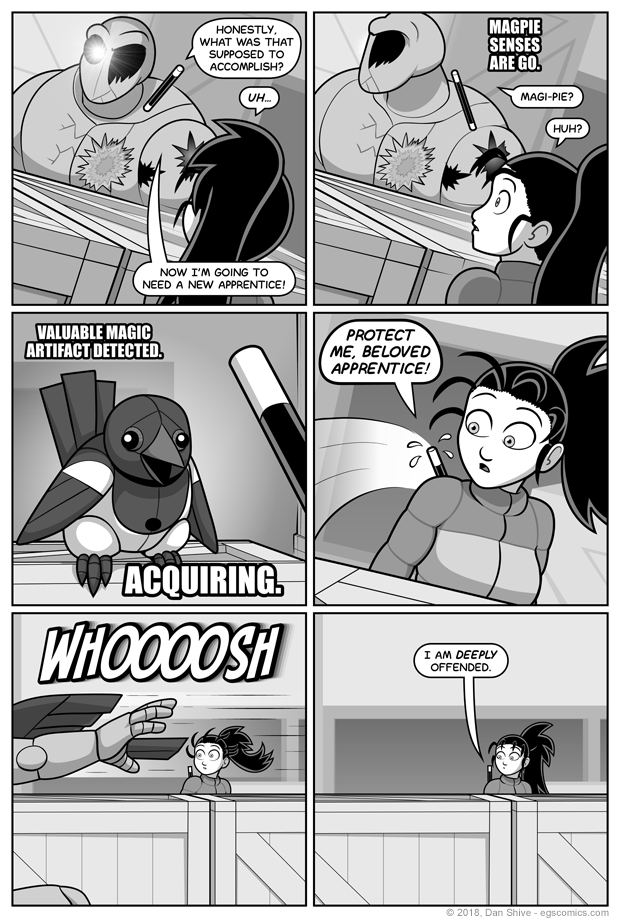 Now, you might feel compelled to point out magpies stealing shiny objects is a myth based on European folklore, and accuse me of not knowing that prior to making this comic.

Whether you are correct on the latter matter is a matter unimportant to future historians, and I shall therefore not waste their valuable time addressing it in any way, shape, or form, up to and including a simple yes or no answer, and will instead address the former matter regarding magpies and the theft of shiny objects.

Apparently, they do not.

And are quite more likely frightened by shiny objects.

HOWEVER! This is a pervasive myth, and someone apparently made this thing recently enough for it to speak modern English and say things like "are go", so one can safely deduce that it was created sometime after the moon landing and NASA becoming a big deal, but before cool magpie facts became widespread common knowledge that everyone knew prior to writing comics.

Actually, perhaps that's not a fair assumption? The NASA one, I mean. The "are go" line makes me think of NASA, but I'm not 100% sure why. It's late as I write this, however, and it sounds good, so let's just go with that.

The magical magpie is mostly a more recent creation because I wanted it to talk like this, and so Kevin could react to it without some sort of weird translation explanation complicating things. I might have had to look up proper old school English with proper "thou" usage and such if not for the jokes with Kevin (who, for the record, was NOT using such old style words properly).