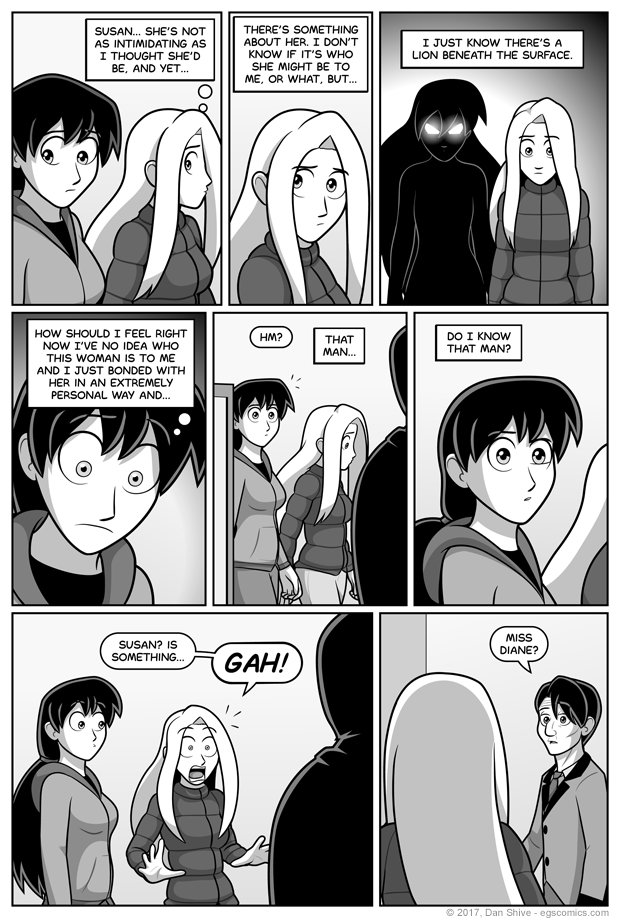 - When first we saw Diane and Mr. Raven together
- When last we saw Adrian Raven

In truth, Susan would much rather be compared with a tiger. She's not keen on the dynamics of lion prides. To be fair, however, Susan knows a great deal more about big cats than Diane. That's not saying much, Diane has had no reason to research big cats, but still.

For all the effort I put into sorting out character placement in this scene, the actual backgrounds on this page wound up absurdly simplistic. This entrance hallway they're in without a a bunch of shop entrances is based on a few I've been in, though I assure you there are some things on the opposite side that we're not conveniently looking towards (the wall behind them is the wall of a department store, the entrance to which is juuuuuuust a bit off-panel).

Of course, once, they move beyond this scene, I'll no longer have an excuse for mostly blank walls, and will have to show more of the actual mall. I am, of course, terrified.

Oh, and I guess Susan's meeting Raven, and has an odd feeling of some sort about him. The important thing, though, is that I'm going to be stuck drawing indications of store fronts and various extras soon.