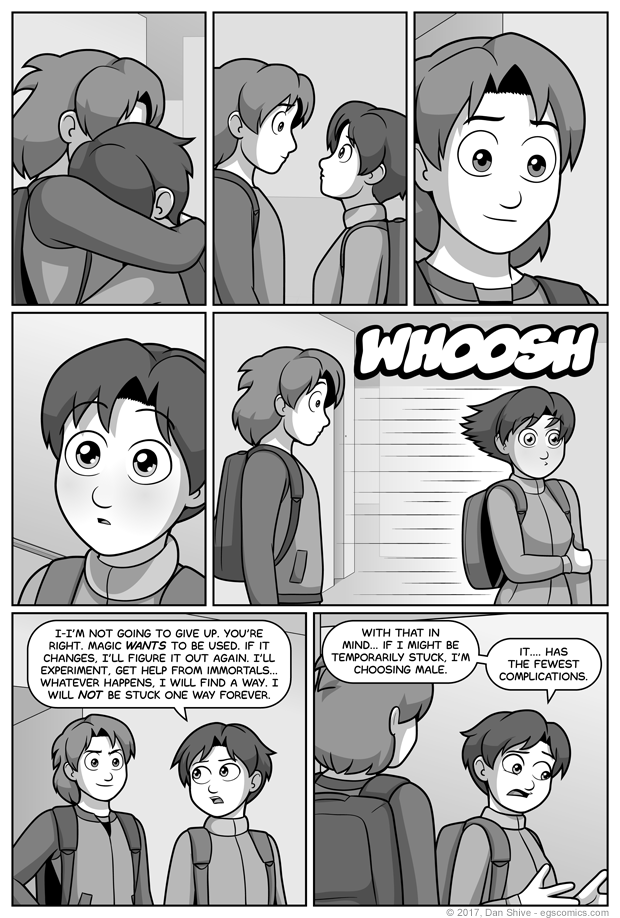 - Tedd's thinking he could get hellp from "Box" while having NO IDEA how incredibly right she is.

This isn't the same as Tedd saying she'd rather permanently be in a male form. This is Tedd saying "I'm not giving up hope, there's less to explain if I'm male, and there's less chance of feeling whatever it was that made me blush in panels four and five."

"Maybe. Possibly. I mean, I've always claimed I'm only bisexual while female, but I have a history of overcompensating and making excuses for why I feel things I don't expect others to understand, so maybe that's also--"

"WHY IS THIS INTERNAL MONOLOGUE STILL GOING?! THIS IS THE COMMENTARY!  YOU COMMENT!"

- EGS:NP (up now, original rant follows - EGS:NP sometime Friday, unless I wind up posting it late enough to technically be Saturday, which would be embarrassing, but possible, because this whole dang EGS:NP story has been sort of improvisational in spite of being canon, which is fun, but also means it's not fully planned, and ye gods does that get stressful. Next storyline's going to be written in advance, I'll tell you that much. Carp, this notice has gotten long enough that it's gonna have to stay part of the commentary forever, just editing with the link when the comic's up. Them's the rules. Way to go, me.