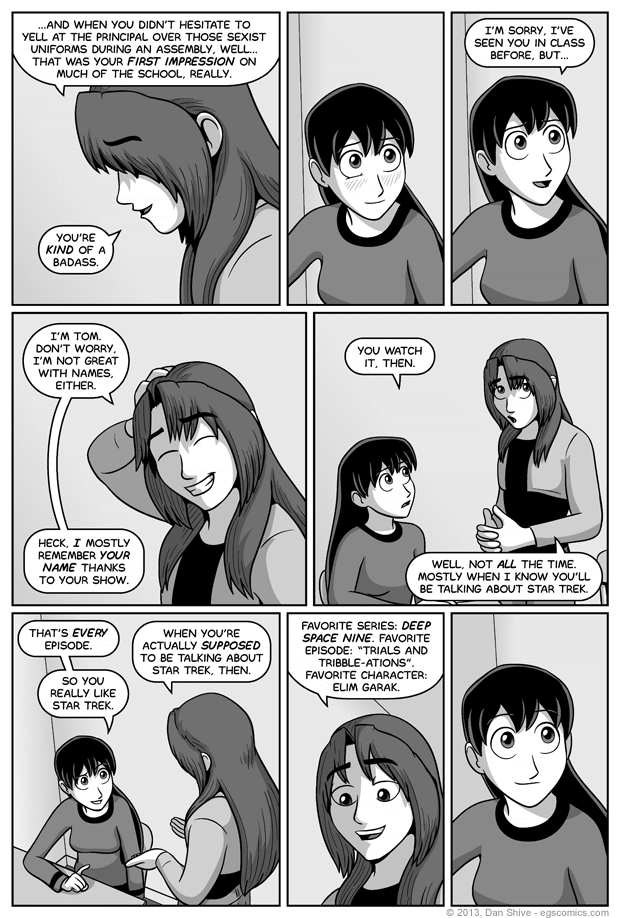 - The assembly
- A tradition started in their first episode, really

I forgot to mention that Tom (as he is now known) wasn't named "Jason" in the previous comic commentary. That might seem like an odd thing to say, but I mentioned on Twitter recently that I a) wanted to name someone Jason, and b) that I had decided on a character for that name.

In short, dude's name is Tom. Also? Dude's a dude. Evidently, it was not immediately apparent.

The second-to-last panel probably doesn't mean much to non-DS9 fans, but that's actually part of the point. He's not listing obvious choices as far as Star Trek pop culture is concerned, and it's unlikely anyone who didn't watch the show would be familiar with the character of Garak, let alone his full name of Elim Garak.

Incidently, "Trials And Tribble-Ations" is a genuinely fun episode. It uses a time travel plot and footage from the original series as part of a 30th anniversary celebration of Star Trek. Of course, that fact makes it a bit less obscure, but hey, Tom also got the title of the episode right. People with a vague familiarity would just say "the tribble episode" , so nyeh.