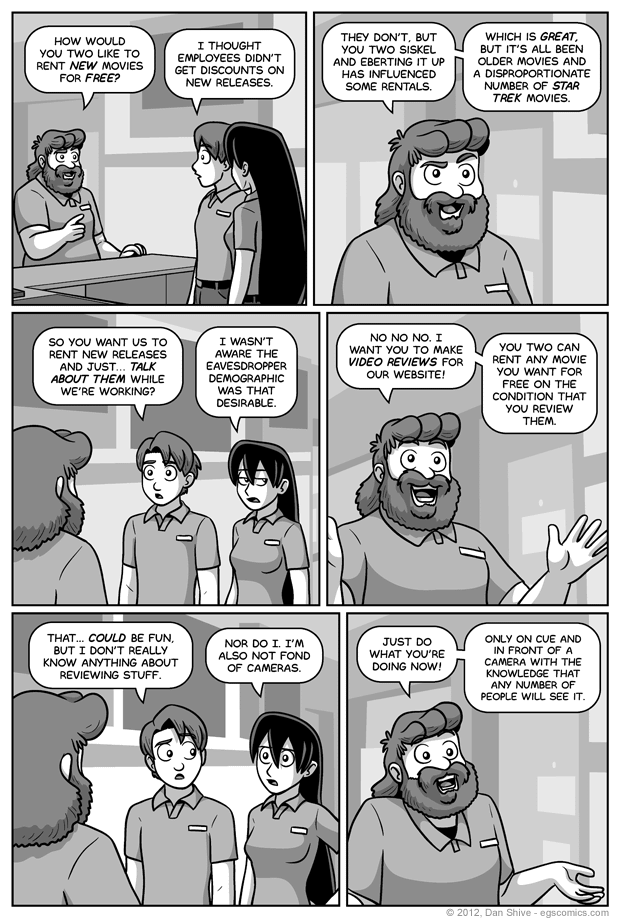 "A common mistake of mine in the past has been trying too hard to write my rough drafts like final drafts. Get the foundation on paper so you have something to work with, then mold that into a sculpture instead of trying to mold nothing into one."

The whole "try to write the first draft like a final one" dealie is a trap I fell into a lot in school, and is one I've been falling into lately. It's like trying to skip several steps by jumping without losing your footing, and it generally isn't a good idea.

For this comic, however, I did write a truly rough draft. I just wrote something fast and adequate so I'd have something to work with. Below is that rough draft with only a few notes added (i.e. who's talking and some stage direction as I don't normally bother including those).

Tensaided - How would you two like to rent new movies for free?

Elliot - I thought employee didn't get discounts on new releases.

Tensaided - They don't, but you two chatting it up like Siskel and Ebert--

Elliot looks like he's about to ask a question

Tensaided - "So help me, Elliot, if you ask who either of those people are I will slap you."

Tensaided - "--Has influenced some rentals. what I'd really like you to encourage, however, is the renting of new releases."

Tensaided - "As such, you two can rent new releases free for one night so long as you two also make video reviews of those movies for our website."

Elliot - "That... Might be cool, but I don't know anything about making a review show."

Susan - "I must confess ignorance as well."

Tensaided - "Do what you've been doing, only on cue and in front of a camera with the knowledge that any number of people on the internet will see it."

And then I edited the hell out of it and molded it into the script seen in the comic. While I definitely prefer the final version, I do wonder how aware people my Character's ages are of Siskel and Ebert. The thought of someone being unfamiliar with them seems simply wrong to me, but times change.

If you yourself are unfamiliar with Siskel and Ebert and are able to handle some strong language (on the internet?! GASP!), I recommend this Nostalgia Critic Siskel and Ebert retrospective. Heck, I recommend watching it even if you ARE familiar with them. Even Roger Ebert gave it the thumbs up on Twitter (Doug Walker, AKA The Nostalgia Critic, printed it out and had the Tweet framed).