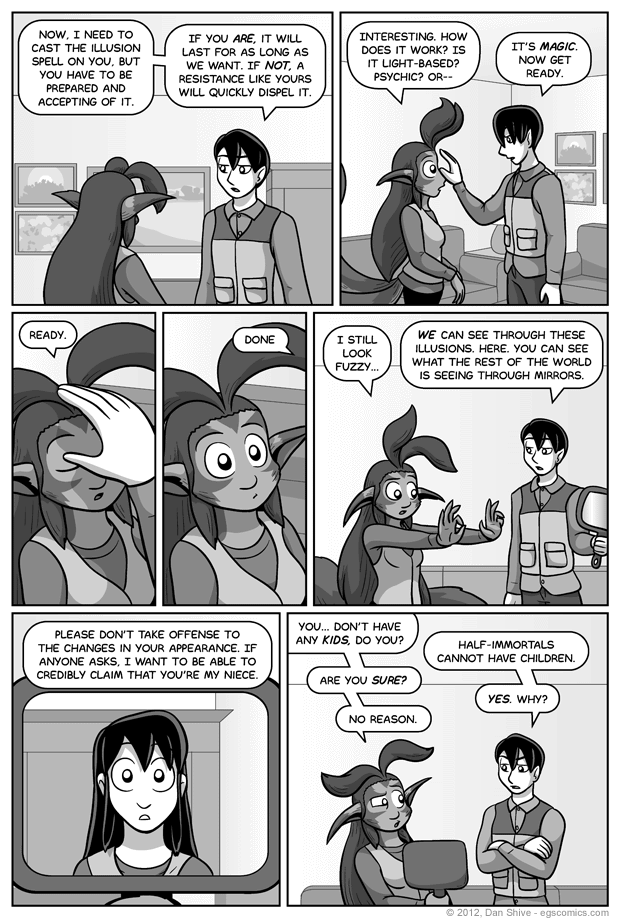 This is another one of those moments I have been waiting a long time to get to. While this story has evolved over time, the fact that Raven would want and/or need to conceal Grace's furriness has been a constant, as was his feeling the need for a way to explain her other than "she's my student". Whenever I attempted to picture a "Ravenized" Grace, Susan would come to mind.

Of course, whether that fact has inspired anything beyond this moment remains to be seen. Maybe it inspired a big huge convoluted plot twist that will one day reveal that Raven is Susan's father oh wait he can't have kids. Well, it could still have inspired something equally convoluted. Or not. Maybe. Perhaps. Tacos.

I received an e-mail after the previous comic that expressed the sentiment that even with orange vests, one risks getting shot by other hunters, and that they would prefer camouflage. The orange vests made sense to me, but I am not an experienced hunter. In fact, the closest I've come to hunting was trying to get a chipmunk out of my home. As such, I wondered if I had made a mistake.

Filled with concern, I turned to the highest power I know: The Twitters. The general response I got was that wearing camouflage was a good way to get yourself shot, and that other hunters would likely see someone moving and potentially shoot them even with camouflage.

The orange vests, on the other hand, are an immediate visual shorthand to other hunters that you are not a valid target. What's more, depending on what one is hunting, the prey might not even be able to see the orange, so one can even be camouflaged to their prey while remaining a clear non-target to other hunters.

Now, I'm not going on about this to gloat about apparently being right. I'm going on about this because camouflage being safer is apparently not only a misconception that exists, but a misconception that can get a person killed. I'm in favor of encouraging behavior that keeps my readers alive and safe, so I felt I should share the feedback I received.

That, and I was apparently right about something! Yay.