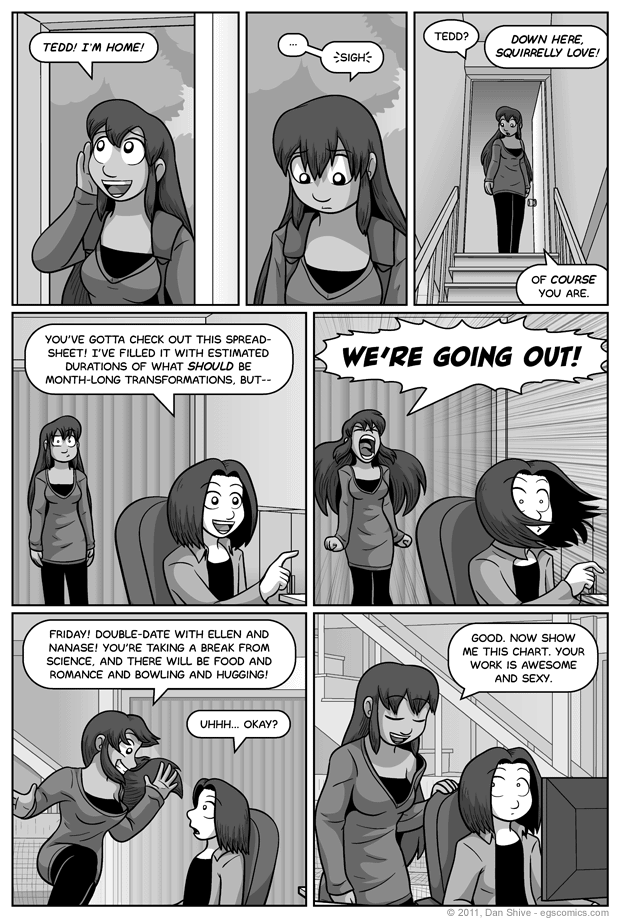 Posted August 12, 2011 at 1:00 am
A word advice to the nerdier among you: your significant other, unless really into spreadsheets, is probably going to want to be greeted in some other way when they arrive home.

I would normally object strongly to someone telling another person "we're going to do this" instead of discussing it with them first (you have not yet seen a hissy fit until you've seen me on the receiving end of something like this), but given that a pattern of Grace neglect has been established, I don't have any problems with this.

I have felt like I've been fighting with my own art style for a while now, going back as far as at least the middle of New And Old Flames. I believe the reason for this is that the style in which I draw bodies has been evolving, but the vertical proportions for the characters have not.

The frustration over this rose to a boiling point over the last few comics, and when I sat down to sketch this comic, I wound up putting off its production to do a bunch of experimental sketching. I sketched Grace a bunch of times, and the slightly more stretched out proportions really did come a lot more naturally to me.

You can probably guess where this is going, but I'll say it anyway: I've decided to at least try out adjusted proportions for the characters. I don't think it's all that dramatic of a change, so it might not be apparent to everyone why I'm even bothering. Believe me, however, when I say it makes a big difference to me. I went from feeling like I was pulling teeth while drawing the characters to really having a lot of fun sketching this comic;

It was LESS fun finishing the comic when the reality of the production delay sunk in and was combined with further things that would delay production and I felt like some manner of frantic chipmunk trying to get it done as quickly as possible, but the actual sketching was a blast and went a lot faster than other recent comics with less complicated poses have.

Feedback is appreciated, although this is probably a poor comic to start asking for it with, as Tedd's sitting and Grace's figure is somewhat obscured by her outfit. NONETHELESS, feedback, appreciated, yadda yadda yadda.