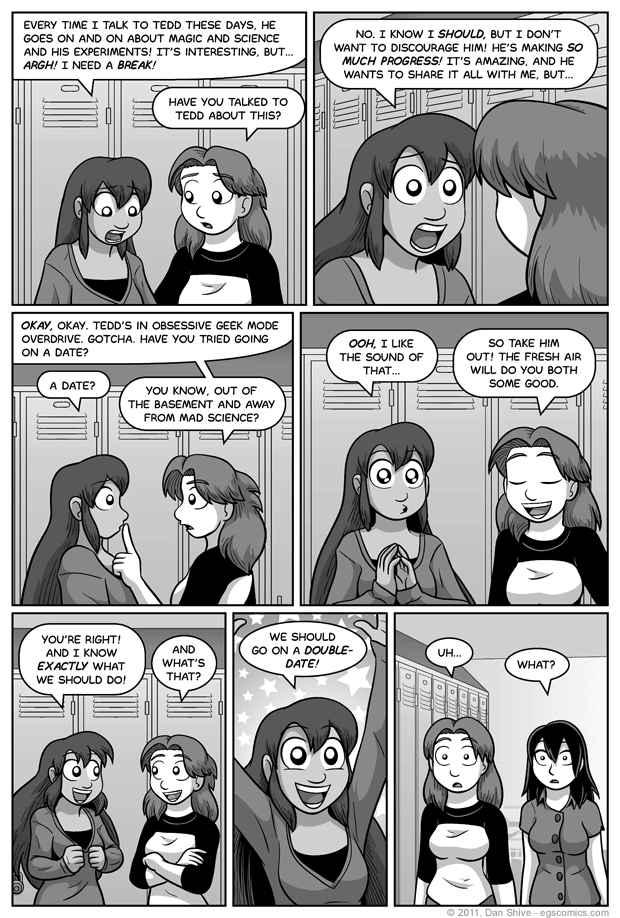 I'm pretty sure I've had Ellen put her finger to Grace's lips before, but I'm not sure when. Or maybe I'm thinking of Diane and Rhoda. I can't keep track of all of my wheelings and dealings in the realm of fingers and lips. Okay, it probably wouldn't be that hard, but really, who keeps track of such things? Honestly.

I originally scripted this as a six panel comic, with the last two panels merged. The angle was basically the same as panel five, but with Nanase made visible. I had it that way because I've been making an effort to always show the faces of characters in the panels they're talking in unless there's good reason not to, but it just looked so boring to me that I spent a fair amount of time debating whether it was okay to not show Grace's face when I finally asked myself "why not just have another panel?"

AND THUS IT WAS SO.

Okay, that may not be the most epic of stories behind the scenes of comic making, but it's common for people to ask how I determine panel layout and what-not, and this was an example of the decision making process, so I figured I'd share it.

That, and there's not much else to say about this comic that isn't best saved for the next commentary, so panel layout rubbish it is!