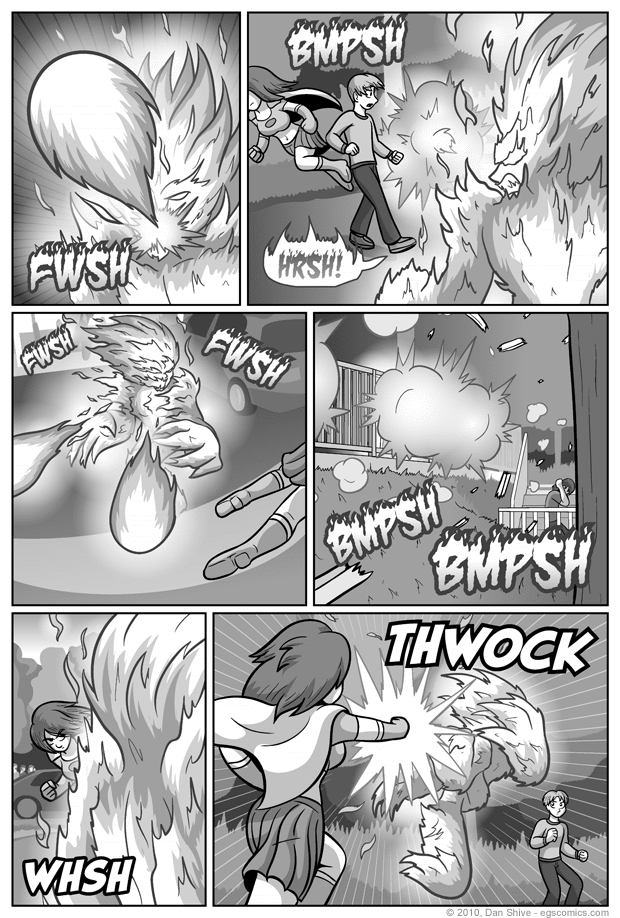 Posted October 6, 2010 at 1:00 am
What the...? Um, wow. I could've sworn I wrote commentary for this thing days ago, but apparently, I did not. Well, there's still an hour before the update. I can write a commentary before then!

Okay, okay! This comic was one of the more complicated to make for this storyline. The actual drawings were pretty simple, but the layout difficult to sort out. I don't remember how many different ways I pictured panel three, but I know I went through several and originally pictured it as an overhead shot. I threw that idea out when it instantaneously made me fall asleep from boredom.

Panel four, on the other hand, is pretty much exactly as I pictured it. Well, not EXACTLY. The drawings in my head are done by a master I cannot match, but the positioning and angle and stuff is pretty much spot on. Those fireballs might not be "fire", but they can do some damage.

I actually spent a few minutes fine-tuning the background characters (WAY back) in panel five, but I think that was ultimately unnecessary. They're basically a small cluster of barely discernible pixels, and I'm betting they'll be hard to make out even with a high-resolution print out. Paying attention to minutia that nobody will ever have reason to care about is evidently one of my foibles.

...Come to think of it, that's one of my MAJOR foibles. That might be why I respond negatively to unnecessary nitpickery by others. That's MY thing!