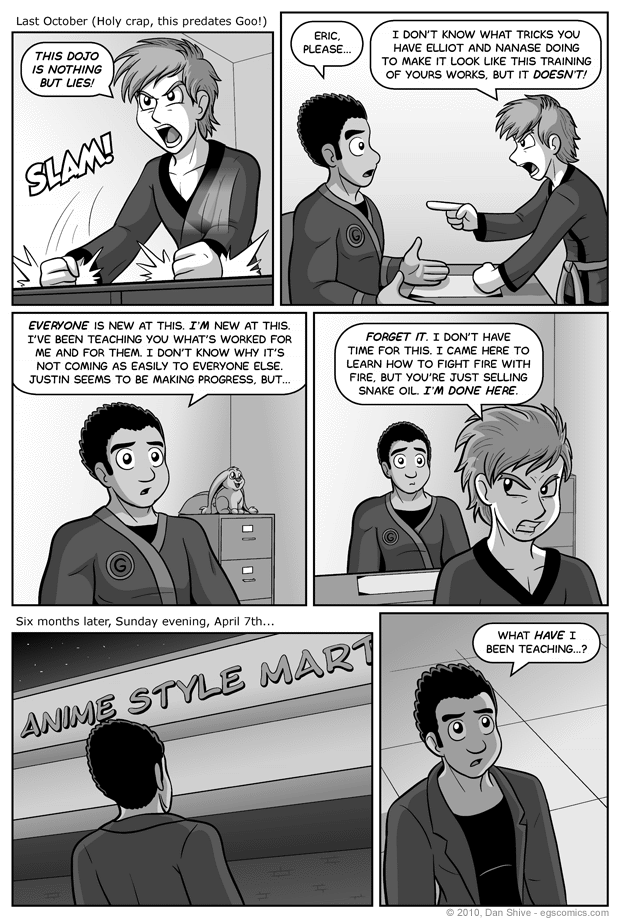 Posted August 18, 2010 at 1:00 am
In theory, The Goo storyline occurred on January 25th, so the first four panels of this comic take place in the previous year! What year would that be? 20XY, of course! What do the X and Y stand for? Quit asking silly questions that I don't know the answer to!

For those unfamiliar with using heads as a measuring method when drawing people, I'm aware it sounds creepy, but let me tell you something: it gets creepier. Both with EGS and more realistic drawings, eyes are used for measuring facial features. Just picture it: a whole MESS of eyes on a single... oh wow. Another flimsy connection to goo! Sweet.

Greg's hair is inspired by a friend of mine from high school whose hair was nothing like Greg's beyond being black hair. The reason it's still inspired by him is because this friend was a big fan of Dragonball Z, and a character named Vegeta in particular. While Greg's hair looks fairly different, the current upward and slightly-pointed design is inspired by Vegeta's ridiculous (i.e. awesome) hairstyle.

The next paragraph contains a SPOILER from what I think is, like, the second episode out of hundreds of Dragon Ball Z. If this bothers you, stop reading this commentary here. I doubt this will apply to anyone, but people go nuts over spoilers, so... yeah. Here your warning be.

This is also why Greg has a bizarre "rivalry" with Carrot Top. In Dragon Ball Z, Vegeta is the rival of Goku, and Goku's actual name is Kakarrot, a pun on "carrot".