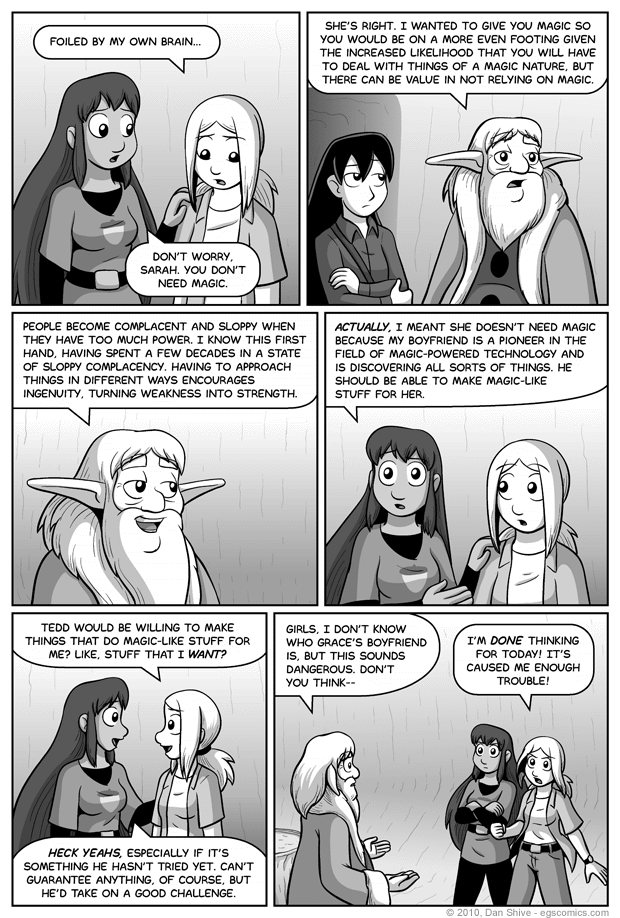 Posted July 23, 2010 at 1:00 am
There are those among the readership who say that Sarah getting magic would be boring and not really add to her character. I tend to agree. There are also those who say that Sarah not having some sort of magic lessens her ability to participate in whatever adventures the others might have. I also tend to agree with this.

The idea of Sarah collaborating with Tedd, however... Frankly, I want to see that. I hope I'm not the only one.

And so, another "wrong" lesson is learned, although I have to say that I only agree with Jerry from an "in theory" standpoint. Thing is, people can learn from other people's mistakes. Just because someone has power doesn't necessarily mean they're going to become sloppy or complacent, and not having power doesn't necessarily mean an individual is going to wind up with heightened ingenuity or a better outlook.

To quote Dr. Cox, "statistics mean nothing to the individual." While there are those who will deliver gold when working with limitations and dirt when they have none, that doesn't mean it's true of all people. I'm sure there are people out there who would simply be in a position to do more good in the world if they had more resources and would actively do so if they had them. What Jerry says is certainly a "look on the bright side" outlook, but that doesn't necessarily apply to Sarah.

...Except (dammit), now that I think about it, it does. Sarah will have to use creativity and ingenuity to accomplish anything with Tedd and will likely be all the better for it relative to her just being given magic right here and now. I think Jerry might have actually bested me on this one. There should be some sort of rule against characters doing that...