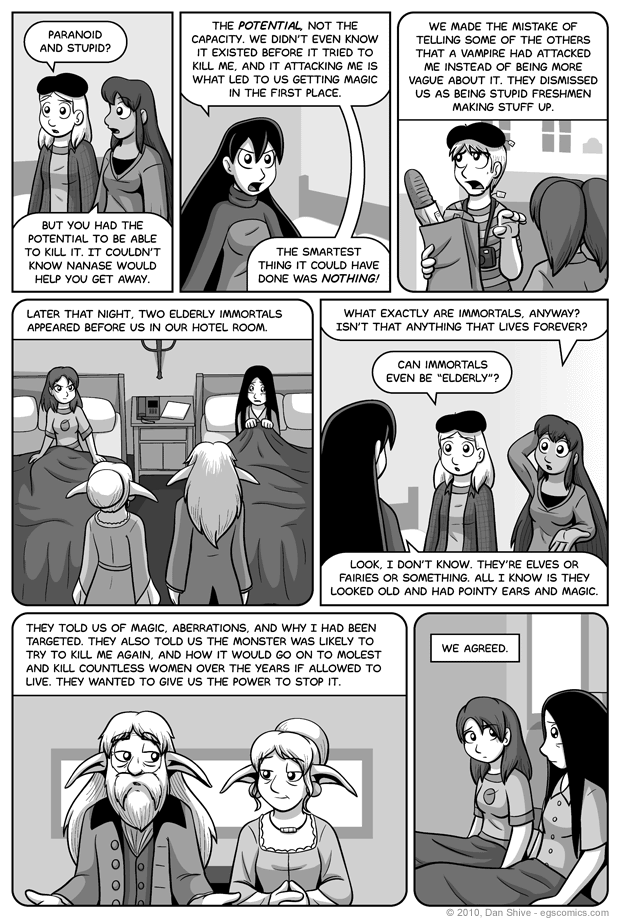 Posted May 24, 2010 at 1:00 am
I'm going to quote a forum post I made about the previous comic's commentary at the end of this commentary. It was a post in response to some who perceived the last paragraph of the last commentary as an insult, which was not my intent.

As I've mentioned, I done thunk up the majority of this plot a while ago. Back in the day, I agreed that the logic behind the monster's attack was sound, but the more I thought about, the more it became apparent that it really would have been smartest to just stay away from Susan. It seems reasonable to me that If I could realize this, so would Susan.

I waffled like a pancake several times over whether Nanase and Susan would attempt to tell anyone about the monster's attack, but in the end it just seemed more natural for them to at least try to tell someone given the potential danger to others. One of the reasons I was hesitant was because I quickly get frustrated with stories where young people tell the truth but older people don't listen to the point of absolute stupidity (the A Series Of Unfortunate Events movie, anyone?).

And now the forum quote clarifying what I meant with the previous commentary's last paragraph:


[quote=I]
I'm going to break my "stay out of reaction threads" rule momentarily to point out that my intent wasn't to insult the intelligence of the readers. The idea was that my reasoning as to why it didn't count as a vampire sounded less like concrete logic and more like excuses as to why MY monster was a totally non-vampire original. The reference to panel two was in reference to people not buying into the excuses and recognizing it for the variation on vampires that it is.

That, and I honestly believe if the comic hadn't brought up vampires but instead just described a long-lived being that seduces women and sucks their blood, people would rightfully call me out on trying to pass a vampire off as something else.

Frankly? With all the variations on vampires in fiction, mythology, etc, this thing may as well be referred to as a vampire. The only qualification for being an Aberration in this context is being a human who turned themselves into a parasite to achieve near-immortality. That could mean any number of things, and referring to this thing as a "vampire" variety of aberration makes as much sense as anything else. Giving this specific variety of aberration a title other than vampire sounds... well, it makes me feel like I did when I said "EGS mythology" in the commentary. It seems overly anal and unnecessary to call it something else.

Besides which, undead don't exist in EGS (the closest thing would be animating corpses like puppets, which I don't think counts), so this is pretty much as close as a monster in EGS is going to get to being a genuine vampire.

Also, no time travel. Something happens, it happens, damn it. No going back and undoing it (outside of Lucas-style edits).
[/quote]