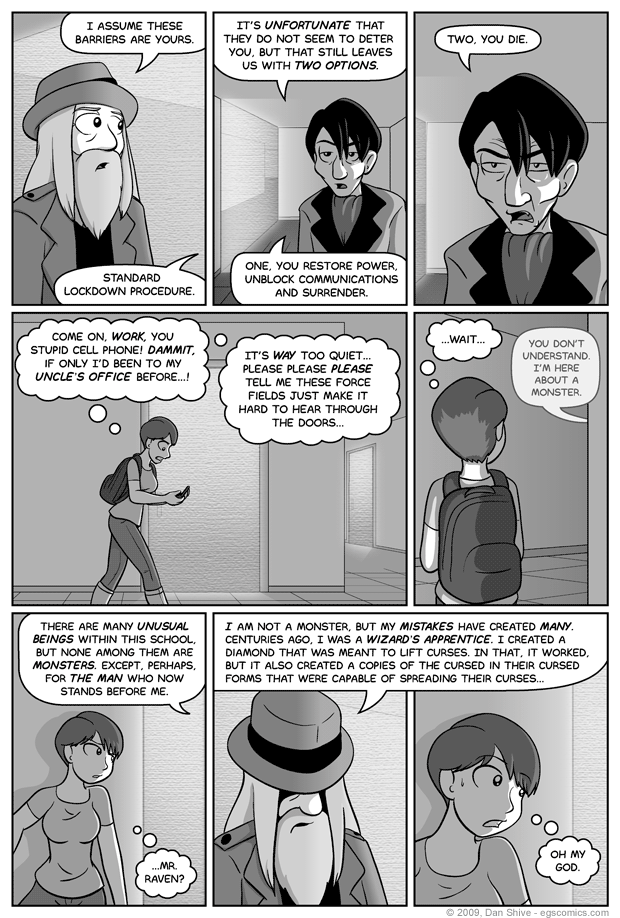 Do you think this page has a lot of exposition? Do you? Buddy, you don't know what exposition IS!

Allow me to expand. One of the reasons I've wound up having a lot of exposition in the past is that I worry too much about things. In this case, I worry about people getting what's going on and why the characters are doing things to the point that I include too much text. As such, this page and upcoming pages leave out a LOT of exposition that a part of me would very much like to see.

For example, in this page, Nanase points out that she's never been to her uncle's office. A reader familiar with how her fairy doll spell works will likely realize she is thinking this because this means she can't use her fairy doll spell to contact him, so she's stuck trying to get her cell phone to work (which, given that this is Nanase, truly shows desperation). I could have included a LOT more text to make sure there was no room for doubt.

Of course, anyone who complains about the exposition in the last two panels is being unreasonable. For one thing, this was last explained in 2002. For another, it's not gratuitous; he's explaining who he is, and is being pretty brief about it, too. Granted, he's saying variations of the word "curse" a lot, but that, too, is relevant ^^;