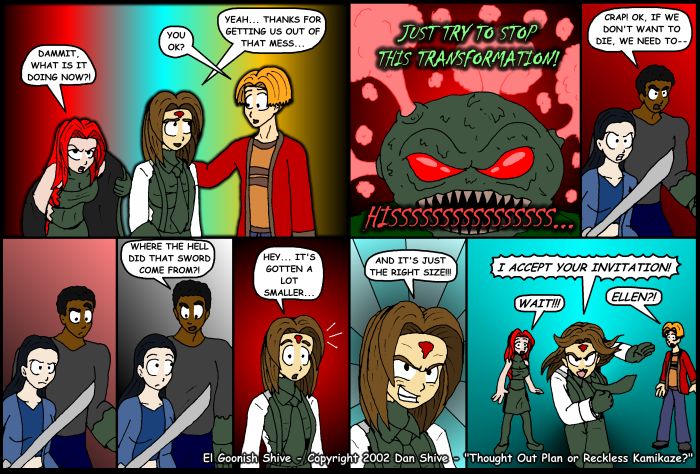 Okay, NOW I can comment on where the hell that sword came from!

It's a secret to everyone.

Phew! Glad that's out of the way! In all seriousness, it does get explained at some point. I'm not sure how many of the details I had sorted out at this point regarding how Susan made that sword appear, but I think whatever I wound up going with was at least close to what I had in mind when I posted this.

This goo transformation aspect of this is in reference to Dragon Ball Z and how characters would always just allow their opponents to transform. I think there's maybe one instance in the entire series when someone attacks an opponent mid-transformation. Granted, they weren't smart enough to use the cool energy blade that seems to be able to harm even the most powerful opponents, but they still showed more sense than anyone else in the history of the series in that moment.

Speaking of DBZ, it's possible I was referencing a particular villian with all that steam coming out of the goo? I'm not sure I was. It makes sense to me given in context that it would have to do something like that to compress its form and I'm flinging around red hues with reckless abandon during this sequence... No, I honestly don't believe it was intentional, but either way, panel two works as a Majin Buu reference (pink big bad guy who let off literal steam when powering up).

Speaking of hues, my sincere apologies for how gradient nuts I went at this point in the story.