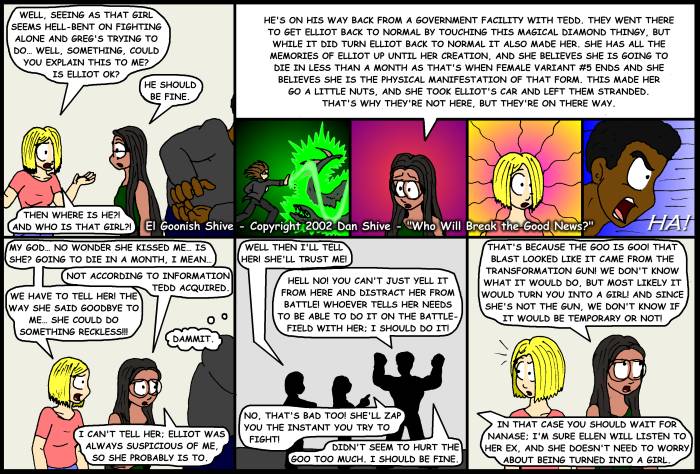 Bottomline! Everything that's already been established and it's too dangerous to tell Ellen she should be okay after a month because it could distract her at a crucial moment, OR Ellen might zap the messenger and leave them disoriented and vulnerable to goo attack.

I guess the latter was worth addressing. Probabably could've done it with fewer words, but let's cut 2002 me some slack on those last three panels.

As for the huge recap, I can sometimes worry too much about specifics, such as how informed each character is. I'm fairly certain I included the recap not only for recappery purposes, but to make clear exactly how much Sarah knows. Sort of unnecessary when you can safely assume certain thing, but like I said, I worry too much about such details at times.

And just in case anyone was confused and has been waiting twelve years for an explanation, Greg is trying (and failing) to shoot an energy beam from his hands between the first panel and "dammit". "Ha" is a Dragonball reference.