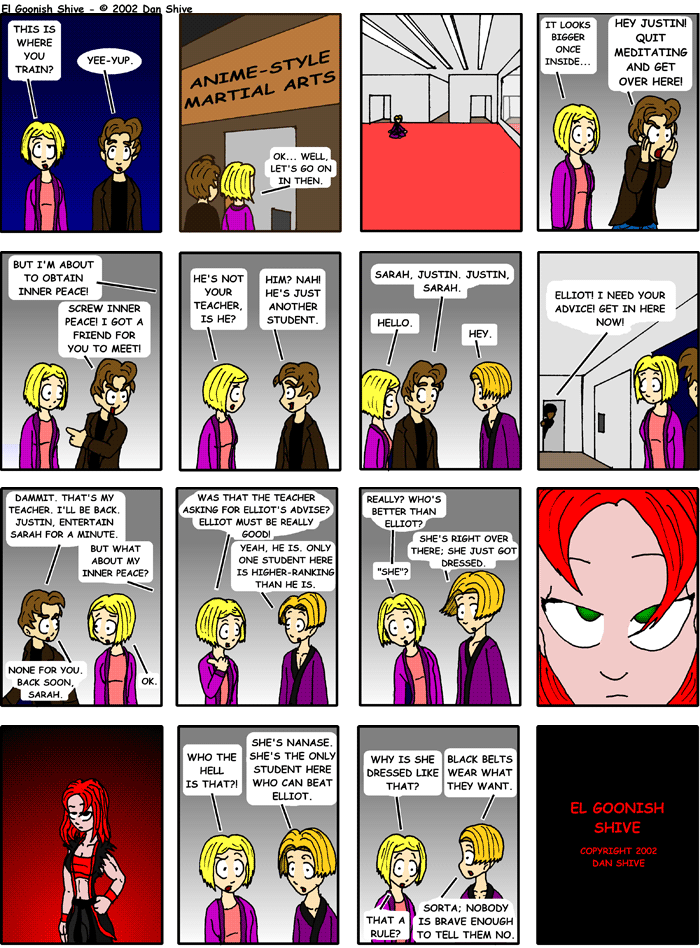 I’m not sure why Sarah feels it necessary to point out that the martial arts dojo looks bigger on the inside. I didn’t even watch Doctor Who back then, what with it being 2002 and all.

Anyway, Nanase and Justin! WOOT! You may not realize this, but it’s time to do a happy dance.
Also Greg, but he’s barely visible, so we can celebrate him later.

I used to take Martial arts lessons. In theory, I could still punch and kick things as necessary. I can also theoretically throw people who try to punch me, but I’m so out of practice that I’d more likely just dislocate somebody’s arm or something. I guess that would work okay if someone was punching me. Moral of the story: Don’t punch me.

Nanase’s name is Japanese and is, in theory, pronounced “Nah-nah-say”. There’s probably a better way to phonetically put that, but close enough. Justin is pronounced “Justin”, and Greg is pronounced “Vegeta”. I mean, Greg.

I actually wanted Nanase’s hair to be a mix of red and black, but I couldn’t get it to look how I wanted, so I just made it red. That’s basically why Tedd’s hair is purple, too, except his wasn’t going to be a mix. Basically, weird hair colors are natural in this universe because I didn’t know how to make black hair look good.