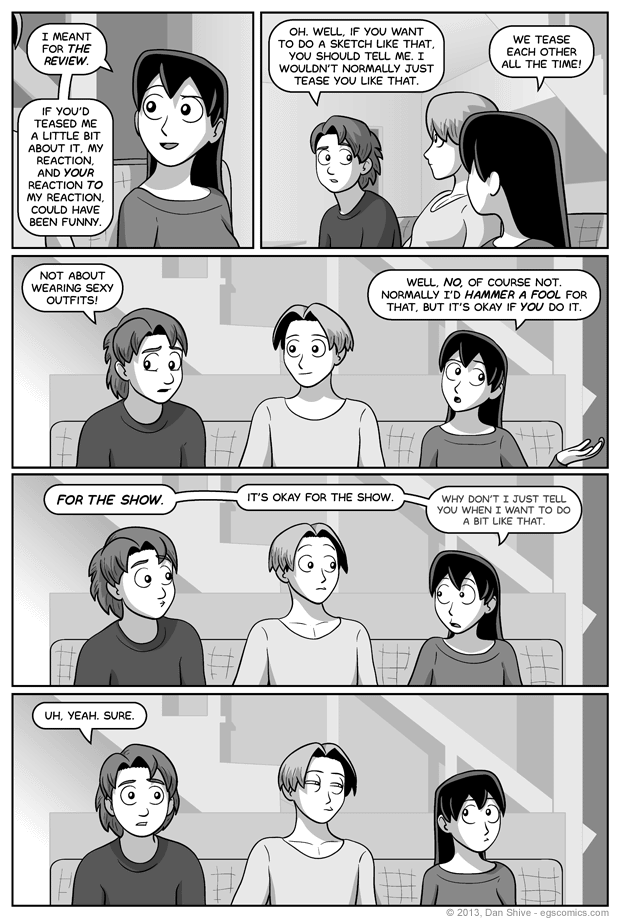 Posted February 5, 2013 at 1:00 am
I originally pictured this comic and the previous one as one double-sized comic, but I really don't want to have updates of enormous stature unless absolutely necessary. At the same time, the update pacing of waiting for Wednesday didn't sit right with me, either, but I like to have updates on Wednesdays, BUT...

Look, long story short? This and the previous comic is why there's five story comics this week.

Most people I have heard from seem to be pleased with Elliot's hair, which I'm glad to hear. I don't think a single person has commented on the change to Susan's hair, but then her hairstyle didn't really change. She just finally got someone to trim her bangs (last comic with Susan's longer bangs).

If Justin's hair miraculously becomes more poofy in subsequent scenes, just assume the canon explanation is he realized he really needed to use more volumizer. And he's probably going to grow back the sideburns I forgot to give him, which can grow back pretty quickly because, dude. Sideburns.

And maybe some sunglasses. He'd look cool in sunglasses. And on a motorcycle. Playing card games.