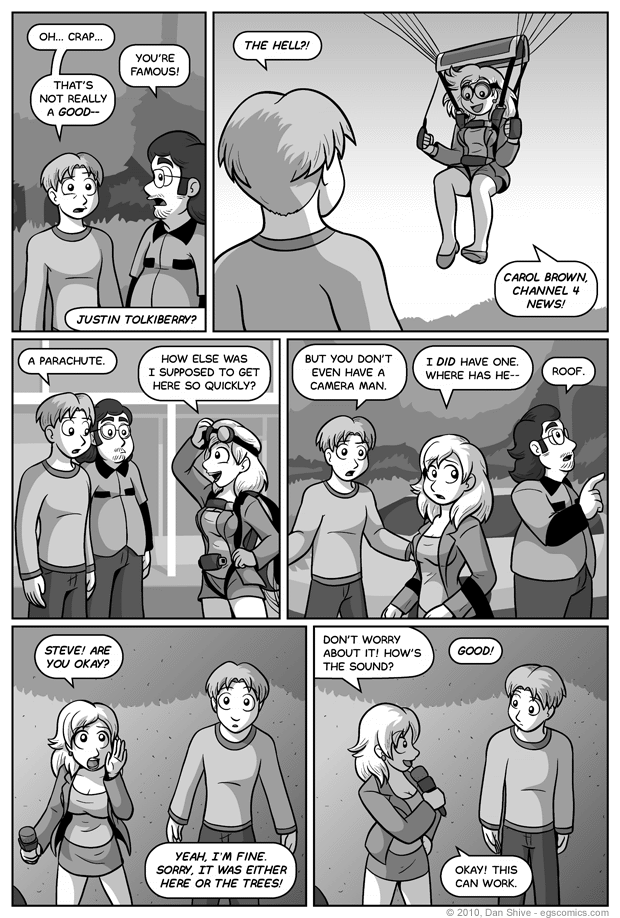 Posted October 18, 2010 at 1:00 am
Carol's explanation in panel three exactly matches my own explanation for why she arrived via parachute (there is presumably a helicopter or something nearby). I couldn't rationalize her arriving this quickly by land given where I picture the comic shop being, the backed up traffic, time of day, etc. While still absurdly quick, her arrival by air bypasses the traffic bottleneck issues and is more logical.

That's right. I consider this the logical option. Incidentally, anyone who wants to claim the comic isn't bringing silly back at this point is now officially full of it.

It wouldn't be surprising if you know, have known, or have heard of someone with the name Carol Brown. Whenever I name a character, I run a search on that name to make sure there isn't some sort of conflict. With a first name and surname this common, however, it's pretty much a non-issue. Nonetheless, there's an EGS-specific reason she has that last name.

I mention this because I had a choice in this comic regarding how she could respond to her camera man being on the roof, and while it might have been funnier to have her not ask about his well-being and focus entirely on how this might affect her reporting, I felt it important to have her respond as she did. His safety and well-being first, the job second.

I wanted to include one of the most excitable of the junior high kids in this comic. He would have been in panel three, his head sort of creeping in with a look of shock at the presence of Carol, a callback to similar jokes about the junior high kids being excited by attractive women being in the shop. Much like the Dalek I wanted to include three comics ago, however, he would have been difficult to make out and would have made the panel even more cluttered. It's already pretty busy with all that parachute gear.

Speaking of clutter, that's one of the reasons more extras aren't being shown. They're off-panel, but they haven't left. Another is that I wanted to show the last two panels from the perspective of the camera man, which meant at most including the police officer and/or George, and I wanted to focus on Carol and Justin.

So, yeah. I have tons of excuses for drawing less characters in this comic. GO ME!