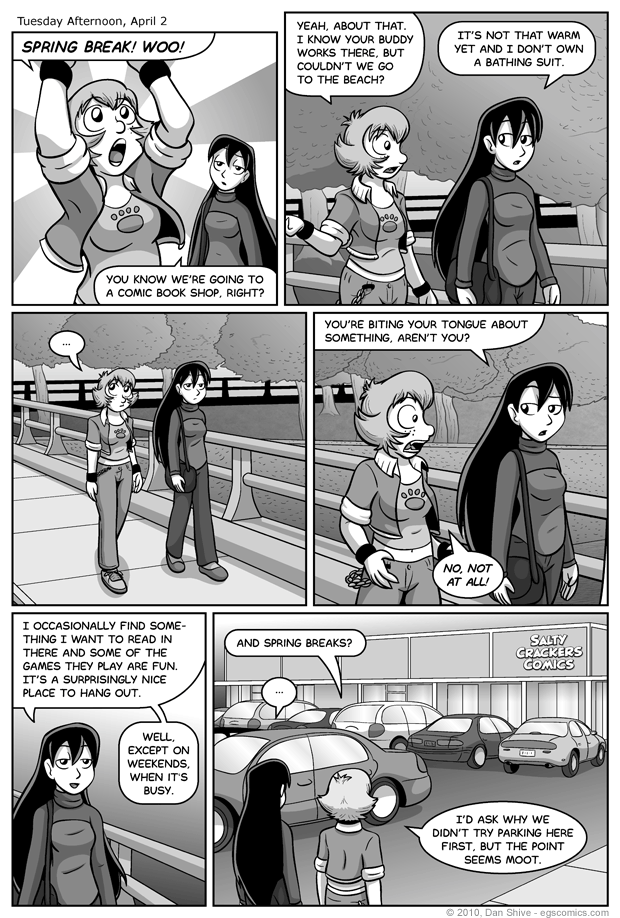 Posted April 14, 2010 at 1:00 am
Okay. Okay, I can do this. Focus on the thoughts that went into the comic and not on any personal angst that

OH GOD I CAN'T DRAW TREES! Landscapes are my kryptonite! I need to buy a 500 page sketchbook and fill every side of every page with drawings of local parks!

*Erhem* Sorry, where was I? Oh. Both Catalina and Susan are wearing relatively new outfits. Susan first wore hers in an EGS:NP, and Catalina was first seen wearing her's in a sketchbook entry.

I first saw someone wearing a cropped jacket like the one Catalina's wearing on Dragonball Z, but that was a guy wearing it and if he wasn't a cartoon character, I don't think it would have been flattering. Later on, a female friend of mine with a tendency to wear cool, interesting outfits was wearing one, and I realized that women could genuinely pull off that look without looking silly (even if the jacket is technically illogical in failing to cover one's midsection).

...What? You think Catalina does look silly in that outfit? You think it looks like something from out of the eighties or some other decade that is not current? You think I like weird fashion? That's absurd! Completely and totally absurd! How dare you say such absurd things!

The last line in this comic may seem unnecessary (probably because it is), but it just bugged me too much to not at least acknowledge that it's odd that they were walking to the comic shop when there's a parking lot right in front of it.

I can think of several explanations as to why Susan would park elsewhere, such as it being a habit, not liking the parking lot outside of the shop (the parking lot of the store that inspired the one in this comic was certainly bad enough that I would sometimes park elsewhere), they were getting lunch and parked closer to there, etc. I just figured it'd be easier to hang a lampshade on it than give an excuse.

In retrospect, however, I should've just had them try to park there because then I could've had a simple car interior as the majority of the background and wouldn't have to draw TREES! EVIL, TREACHEROUS TREES! Darn you, Treebeard! I was on your side, but after this?! No wonder no one is on your side! You betray all who would stand by you! *sob*