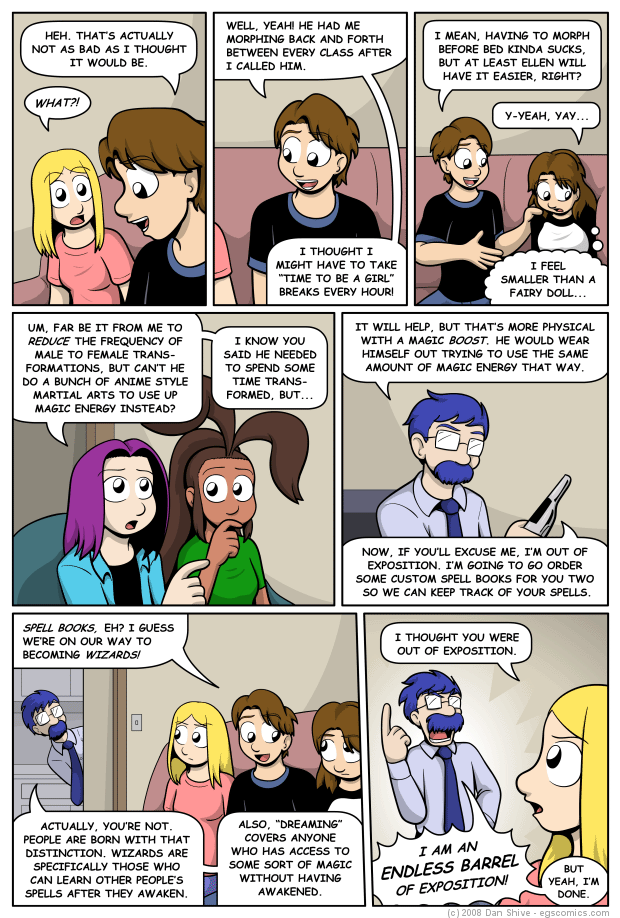 Posted November 26, 2008 at 1:00 am
While Elliot is certainly pleased that he won’t have to transform every hour, he is still definitely putting on a brave face in this comic for Ellen's benefit. He feels a huge amount of responsibility for Ellen's well being and happiness and is putting her first, meaning this effort to look on the bright side is primarily for Ellen's benefit out of consideration for Ellen's own current situation and the very circumstances of her existence. This is, of course, making Ellen feel even more like a jerk, even though that's not Elliot's goal.

In the original script, there was one page each devoted to dreaming and wizards in spite of the fact that this page proves that you can basically boil down their concepts into a single panel once everything else is established. Verres does pretty much sum it up in this comics. Wizards are different because most people just get spells that reflect who they are while wizards can learn other peoples spells, and dreaming covers anyone who has magic abilities without having awakened.

"Dreaming" doesn’t specify what kind of magic the individual has, and winds up being an extremely general term as a result. Basically, it tells only this: The individual has magic, but has not been through an awakening. The exact nature of that magic could be almost anything. It may not seem like a handy term as a result, but at least it’s quicker than saying "that guy has some magic abilities but hasn’t been through an awakening."

As one might guess, it’s referred to as "dreaming" because one is usually dreaming prior to awakening, as Nanase, Elliot and Ellen were by virtue of their martial arts. As Mr. Verres already pointed out, the awakening terminology is flawed in general given that nothing is really "waking up", but that's what the rest of the terminology builds off of. It is a bit like saying one's muscles have awakened after getting buff, however, given the nature of magic in the EGS universe.

Come to think of it, that would be a funny thing to say after going through a bunch of weight training. "My muscles... have AWAKENED!"

Leading up to the previous page, I had said in a few places that it, not this one, would conclude this round of exposition. I never corrected myself, because I think it only makes the last panel funnier if one is genuinely thinking the same things as Sarah.

This really is a milestone exposition wise, however, as it marks the point where pretty much all the basics are set. As far as mechanics and the rules of the universe are concerned, there shouldn’t be a need for such lengthy stretches of exposition again in the foreseeable future. There’ll still be exposition, of course, but it’s this sort of "okay, this is so complicated that we need to gather the characters and have multiple comics of Q&A just so we can understand how this system works" sort of exposition that I am referring to. I may prove myself wrong, but that’s where that "foreseeable future" bit comes in.

Speaking of exposition, that last panel is a bit of a meta reference, without truly breaking the fourth wall, to all the exposition that has been in EGS in the past. I’m not sure who the exposition champion is, but given that Tedd and Grace would have gotten most of their information by virtue of being connected to Mr. Verres, I’d say he winds up winning by default. That, and if he wanted to, he probably could provide exposition from now until doomsday without running out. The man has a lot of information in that noggin of his.