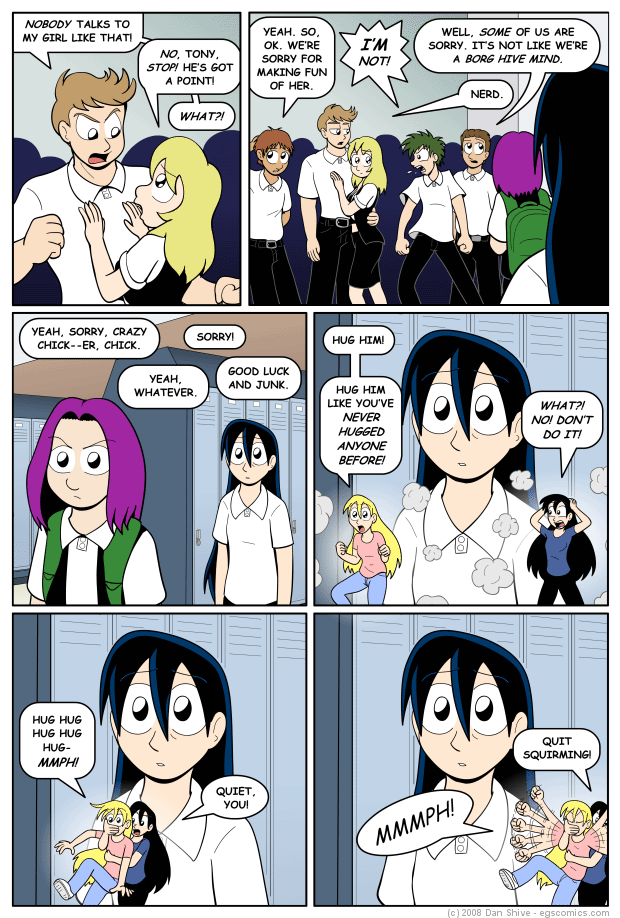 Posted June 16, 2008 at 1:00 am
Yes, there is an important lesson in today's comic. If you're going to have a mob mentality, be in a mob that is nice to other people! (Cue rainbow, campy music and a slogan related to knowledge and the benefit of having said knowledge)

The concept of Susan's natural nature and who she's been nurtured to become being in conflict has been a huge part of her character for a while now, but this is the most visual it's ever gotten. Had Susan grown up under better emotional conditions, she would likely be more like her blonde (nature) representation and have little issue with hugging Tedd under these circumstances.

I originally thought it would be necessary to establish these nature/nurture representations of Susan prior to this comic, giving an introduction similar to the introduction for her [[2005-01-14|curiosity and logic]]. I decided that would be overkill, slow the story to a crawl, and that their simply showing up at this moment would be adequate while being much less forced. It's unlikely that Susan will ever address these aspects of herself directly anyway, so it's a different dynamic than the one she has with her logic and curiosity.

The former feminist, who I refer to as "Sandi" for now, was not originally going to be Tony's lady friend. I wanted to do the "if my boyfriend says it's ok" joke [[2008-05-07|from before]], however, and I wound up liking the idea that the anonymous boyfriend referred to was Tony. I also like having additional people that help show that while Tony can be a big jerk, it is mostly towards Tedd and he can get along with other people. That's not to say he isn't a jerk to a lot of people; it's just that he's much more of one towards Tedd. Dick, on the other hand, continues to live up to his current name (see previous commentary if confused).