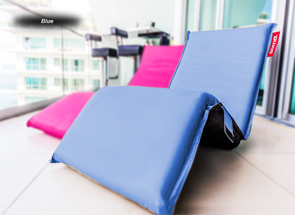 The folks over at the Sumo Lounge asked me if I would review their Omni reloaded, which is a ridiculously adjustable folding chair that gives off a sort of bean bag vibe (though as far as I know, does not actually contain beans). If you want to get a good idea of what it is before my review, I suggest watching their video about it.

I could imagine myself playing the latest popular video games like Super Mario 2 and 3 while sitting in it, so after resisting the urge to ask for one in fuschsia, I told them to send me a blue one.

First impressions were baffling. The Omni Reloaded folds into a nice, easily transportable rectangle and even comes with a bag to stuff it in for easy carrying. As such, I’m confused as to why it was shipped to in a “ready to lounge” position and encased in a very oddly shaped form-fitting box.

That said, the “ready to lounge” position was ready for lounging right out of the oddly shaped box and it was comfortable to lounge in, so perhaps that was their cunning strategy. While the default setting was comfortable, one of the points of the Omni Reloaded is its transforming capabilities, so I quickly attempted to find new comfortable seating positions and possibly a robot fighting mode.

The Omni Reloaded allows for a variety of positions and is easy to adjust. Each part of the chair moves in one direction, and moved past a certain point, each part will reset. Granted, I didn’t realize that’s how it was done at first and might have tried less orthodox methods such as tackling the chair first, but it’s super easy to adjust once one knows how.

One thing about the Omni Reloaded is that it is very low to the ground. Depending on how comfortable you are with touching the floor, it can be a bit awkward getting in and out of it. I don’t like being on the actual floor much myself, but I do manage to get in and out of the chair okay all the same. It’s just something to be aware of if you’re also in “the floor is lava” club.

Being at near-floor elevation also means one might need to move the Omni Reloaded further back to view an elevated television comfortably. On the other hand, if one has a really big TV that is itself low to floor, I imagine the Omni Reloaded would enhance the experience, especially if playing a first person game.

My TV is only 32”, so I can’t be certain, but I can imagine playing Mario Kart on a big screen while sitting in an Omni Reloaded, and it really makes me want a big screen. So basically, I’m saving money on the chair by reviewing it, but now I want to buy a humongous TV. Thanks a lot, Omni Lounge!

Okay, so the lounging gets a good grade. Sumo Lounge also claims, however, that the Omni Reloaded can work as a guest bed, which I took as a challenge. They also say something about pools and camping, but yeah, that wasn’t going to happen.

The Omni Reloaded, once set flat, isn’t much wider than my shoulders. In fact, if I’m on my back, my arms hang over the side. I was able to sleep comfortably on my side, however, and sheets sized for a twin-sized bed work rather well with it (and also magnetically attract cats to it).

One issue, however, is that a bar in the chair can be a source of discomfort if positioned in a certain way (this bar is a non-issue when the Omni-Reloaded is in any position other than completely flat on the ground).

That wasn’t an issue for me while trying to sleep, but it could have been if I were positioned differently. It’s worth noting, however, that I’m a heavy guy, and it’s conceivable that someone lighter than myself might not have to worry as much. I don’t know that for certain, however.

I can’t really recommend the Omni Reloaded as a sleeping surface. At least, I don’t consider it much of a selling point. It was a decent enough surface to sleep on, but I wouldn’t recommend buying it exclusively for that purpose.

I like it. The Omni Reloaded versatile, easily moved around, and I imagine I’ll be using it a lot. I just wish I didn’t have to buy a 72-inch screen TV for Mario Kart now.