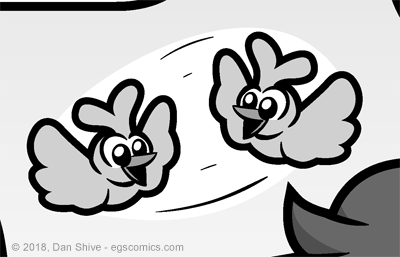 As much as this could be a joke about power of friendship anime in general, there is actually some truth to this in the Pokemon. There are things in-game you can do to increase your bond with your monsters, and, this will result in things like them avoiding damage and getting extra critical hits. It's genuinely a bit absurd how much benefit there can be.

I wound up experimenting with how I handle the lighter lines. Up until now, I've been doing something a bit convoluted involving layers and opacity.

I realized, however, that pretty much by accident, I had divided up my grey palette swatches in such a way that it's ridiculously easy to know which grey to use to function as a light, medium, or dark shadow for any other grey in the palette I've put together, meaning I don't need transparency for those lines!

Point is, this makes my layering less convoluted, and makes it easier to have things like Greg's abs in panel two. It's about the only time I've had abs like that and been happy with it (I know it differs from earlier, but if anyone asks, he's flexing).

Also, now that I've figured it out, it should be faster than the old method.