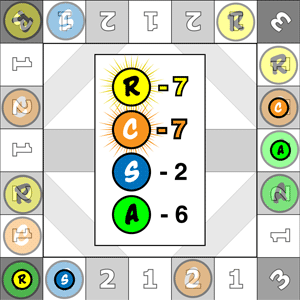 - Not to be confused with the two-type "Small" card

I waffled so much on the clothing aspect of the Shrink card. I considered oversized clothing, napkin togas, doll clothing, etc, and wasn't really happy with any of it.

Eventually, however, I looked into how togas are actually folded, and found a number of ways to do it. Once I tried folding a thin dish towel around a figure and got an understanding of how one of the methods worked, I wanted to do it, as the result looked relatively distinctive.

That said, I've made it more distinctive by it not being entirely done properly. The napkin in the comic is wrapped around her, and then twisted to create a belt of sorts that wraps around the shoulder. The final step is supposed to be a proper knot in the back, but instead there's just that bit sticking out from under the "belt" on her right side.

This is consistent with what I happened when I tried it with a figure, as the fabric is relatively thick on a small body, and doesn't tie as easily as a sheet on a full-sized person would be.

The genie effect never came up, but here it is:

It basically gives every other player a chance to potentially trade up for another form(s) if there's something on them they don't particularly want, so it's very situational. In return, the player with genie potentially gets some card advantage, as they actually get to replace any cards they use.

Ironically, the Shrink card form is a perfect example of a situation in which one might actually ask a Genie to transform them with something else.