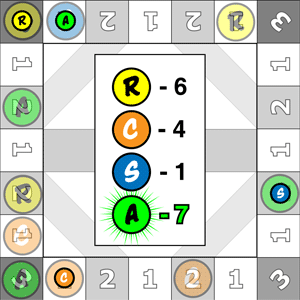 Hey look! It's Rhoda in the upper left corner of the board! Good thing I drew her and not-- 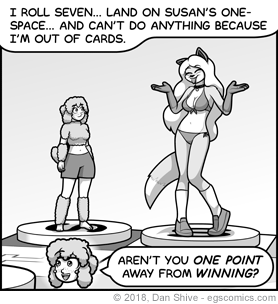 Yeah! For some reason, I got it into my head that THIS was the comic I finally got to show Poodle Catalina's stylish fluffy shins in, and I was too tired to realize that I had completely messed up where she was on the board (and, if you look closely, there's an "S" under her when it should be "R").

I've NO idea how that happened other than "because I was tired", but I was on the verge of posting this darn comic when it finally got through my skull that I'd messed up, and at that point I desperately needed a break and had to go AFK for a few hours.

So THIS comic was extra late! Sorry about that. On the plus side, um... Bonus Catalina? And stylish Poodle Catalina shins?

Commentary from BEFORE I realized my horrible mistake

It might be fun to claim that Ashley was throwing the game to keep it going longer, but nah. She just saw an opportunity to transform someone and took it with both hands without thinking.

Susan COULD transform Ashley now, but she's not going to, which MIGHT have something to do with seeing someone who could've just won the game not do so because they used up their cards on someone else's turn.

There are circumstances in which it would be a smart move to transform someone who lands on one of your spaces. One example is if you have more than one card of the same type in your hand. There's no way you can use them both on your next turn (unless you have Ditzy), and you normally draw up to having three cards in your hand at the end of your turn. As such, getting duplicate type cards out of your hand could be strategic.

There's also the whole "because it's fun" dealie, but if you live to win, it's worth weighing the pros and cons of using up a card on someone trespassing on your spaces.