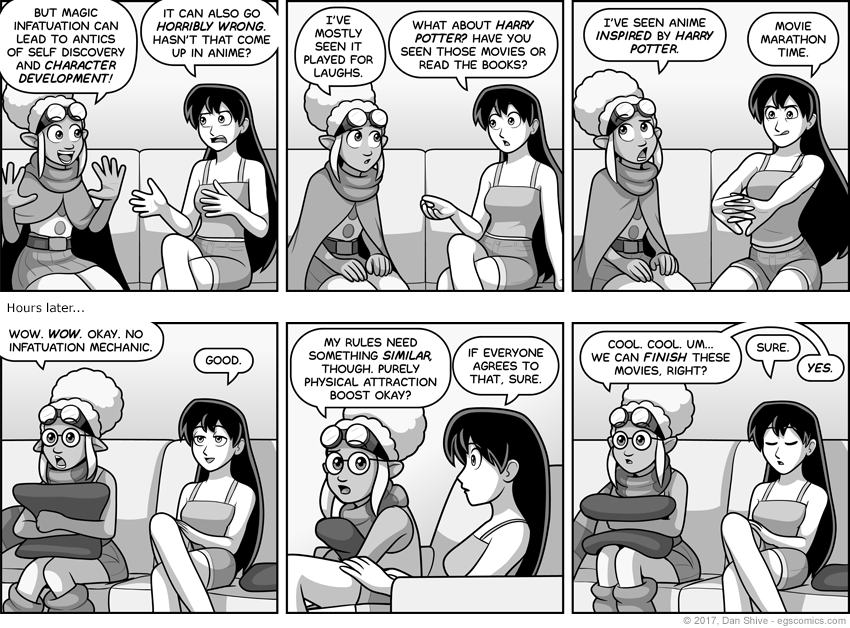 In addition to wanting the two catch up comics to be on Monday because it would be easier to be on time (HA!) , I realized I could put these two specific comics comics together. I felt that would work well.

Worth noting is that I haven't watched a ton of anime series in full myself, and it's entirely possible that there is a perfect example out there somewhere of what Susan's talking about. At the same time, there's so much anime out there that, even if there is a good example, Hanma could have missed it.

It is my understanding that Harry Potter has actually inspired a great many anime, however. Shocking, I know.

Hanma would totally have her feet on the sofa in this comic if not for the fact that Susan, like me, would totally take issue with it. Granted, I would have wound up having Hanma sit as she is anyway in the end just for staging purposes, but the original rejection reason was "Susan would be super uncomfortable with it".

Not wishing to spoil anything major in Harry Potter (seriously, new kids are born everyday, and people have lives to live. There's easily people who haven't read it), at SOME point in the series, it's made clear that trying to make people love you with magic is bad.

As for the "mechanic" Hanma's talking about, well... I may have mentioned this already in a commentary, but they're not just going to be pretending to play a fictional game. I've designed a playable board game around getting points via transformation (of themselves and other players), and the game we're going to see in the comic will be based on the results of my playtesting it.

To the point, Hanma is NOT kidding about that being an actual mechanic in the game, and it mostly can affect which direction a player moves around the board in. It makes things a lot more chaotic, I can assure you.