And thus ends MV5! Next week begins a new storyline that will involve Grace taking on a video game challenge that's perfect for her character, but is she really up for it? But that's a question for the next storyline! Let's wrap up the commentary for this storyline, starting with what's most important.

It's possible I spent a bit too much time and effort making sure their chess game was accurate. I bought a 3D model of a chess board and its pieces, and used it to play an actual game against myself up to a point I felt would genuinely work for the comic. I didn't know which side would be Tedd or Elliot until I reached that point, and I played both sides to win as best I could (which no doubt was amateur hour, but still).

On top of all that, here's a render of it: 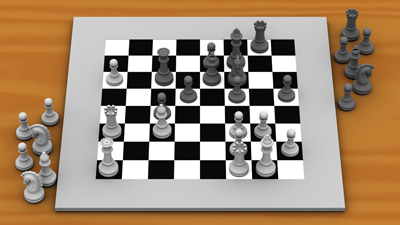 Tedd wound up being White because White actually wound up in a position to get a pawn to become a queen, which means I'm pretty sure Tedd has the advantage in spite of Elliot's boasting. Elliot's in a position to take that pawn before or after it becomes queen, but if he does, Tedd will take Elliot's Queen, and Tedd will still have one AND both of his rooks.

In related news, I've rediscovered that I enjoy chess. HUZZAH!

I mentioned waaaaaay back at the start of this storyline that I wasn't sure where it should fit in the timeline. I also said Tedd would be in the storyline, and I guess this makes that technically true, though I had originally planned him being in more of it.

No later than around the time Sarah started contemplating her place on the kinsey scale, I decided it would be most appropriate if this storyline took place sometime before the card tournament (and Sarah's "I'm at most a two" moment). I was also leaning towards "the past" early on (Nanase fairy with Susan, anyone?), but was still undecided.

Not terribly far in the past. I don't want to set a specific date on it (mostly because I'm not sure when it should be), but it's pretty darn recent in the timeline, wherever the heck exactly it fits.

I also decided Tedd's hair would be the most natural way to make this clear. I didn't want sudden narration without warning saying "DAN DECIDED THIS WAS THE PAST", nor did I want it in some random location in the story. At the end isn't an ideal place to establish that, but hey, it's a place that won't be missed.