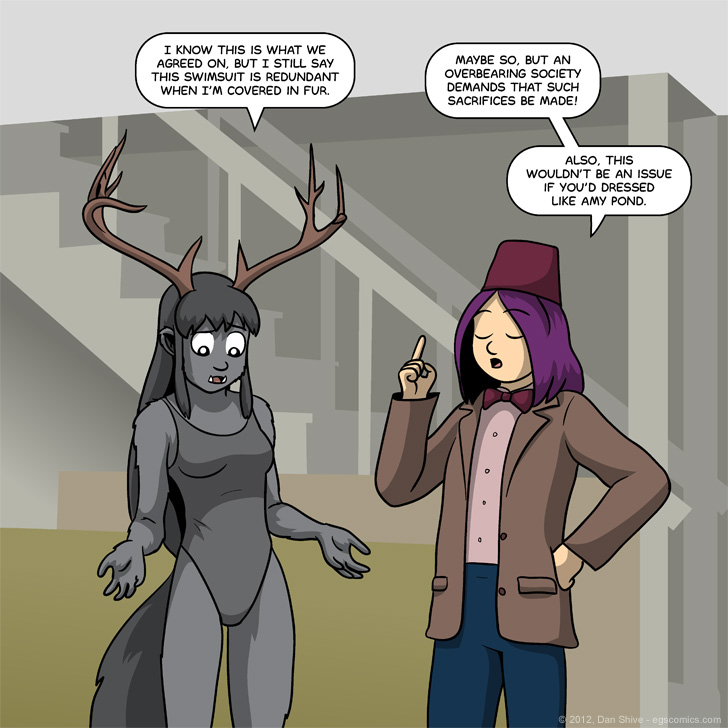 And so begins Halloween sketchbook week! (Meaning new sketchbooks Monday through Friday). In part because it's something I want to do, and in part because I'm still writing the script for the next storyline.

Grace is, of course, dressed as The Stompalope.. Her tail should really be the same color as the rest of her fur, but the lack of contrast with her legs annoyed me so I dyed--er, colored it differently. Grace's figure is also different from what is normal for her, but she's an alien-human hybrid shapeshifter. She can do that.

Tedd, meanwhile, is dressed as The Eleventh Doctor. For people who don't know what that means and don't feel like visiting Wikipedia, allow me to explain it in a way that will annoy fellow fans of the series as much as is humanly possible: He's dressed as Doctor Who.

Right! While I'm on the subject, Amy Pond is one of the doctor's companions. I'm not sure if Tedd's motivations are to do with complimenting his own costume or the fact that Amy Pond has a history of wearing short skirts, but given that Amy isn't furry and Halloween is on October 31st, I think Grace make the right decision.