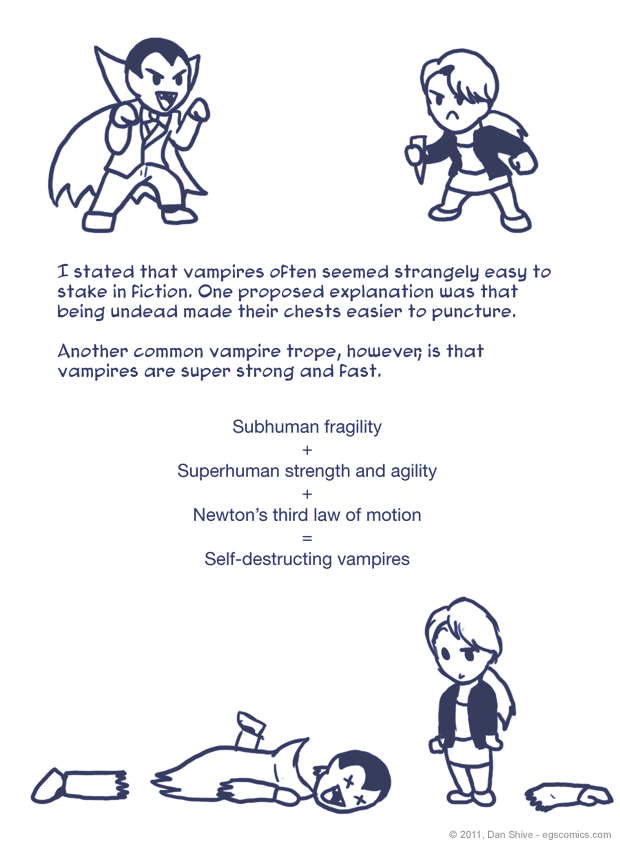 I'm willing to accept a lot of silly magic and things that defy physics in fictional lore (it'd be soooo weird if I wasn't), but if one also wants me to take that lore seriously, they had best at LEAST have some logical consistency within its own world.

So, unless we're talking wacky comedy where running fast causes the vampires to fall apart, I'm not buying the "being undead makes them more fragile" explanation. I think writers just get tired of stakes and like improvisational weaponry regardless of whether it would actually work. That's not necessarily bad, but let's be honest about the silliness.

That said, I have a bone to pick. Several people sent me comments telling me that I had forgotten that Buffy was super strong. If I may quote myself:

When Buffy just sort of stabs a vampire with a stake with her otherwise bare hands and they die, that's one thing, but I seem to recall it feeling like any given character could limp-wristedly poke a vampire in the chest and the vampire would burst into ash.

While I didn't explicitly call Buffy super strong, she is very clearly being noted as an exception. So, no, I did not forget that the legendary slayer of vampires was super strong. I'm sure there are plenty of things I have forgotten or simply don't know about Buffy, but Buffy being beefy has always been pretty clear.