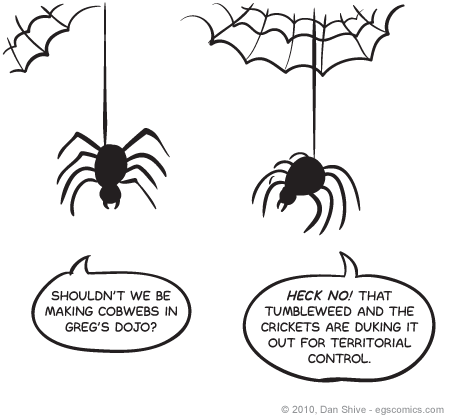 Posted August 26, 2010 at 1:00 am
Obviously inspired by panel two of this recent story comic. It's entirely possible I just like the idea of tumbleweed being an intelligent being with an instinct to dominate desolate places (which would, of course, make those places more desolate).

Huh. I think there's a horror movie in there somewhere... *write write write* Huzzah! And now to stunt-cast Megan Fox as the tumbleweed. That'll make it scary.

Anyway, one criticism of the comic that inspired this was that it was more exposition about the mechanics of magic, but I think that criticism must be coming from someone with such dislike of magic or exposition in EGS that they missed the point.

The "Super Mutant Principle", in and of itself, isn't important. What it represents is, but that could've been expressed with Greg simply saying "I don't know what abilities my training will give people". The point was more re-establishing Greg as a slightly-insane geek, and that it was specifically Justin who was closest to being on the same geeky page.

In short, it wasn't really about the magic. It was about the killer tumbleweed voiced by Megan Fox.