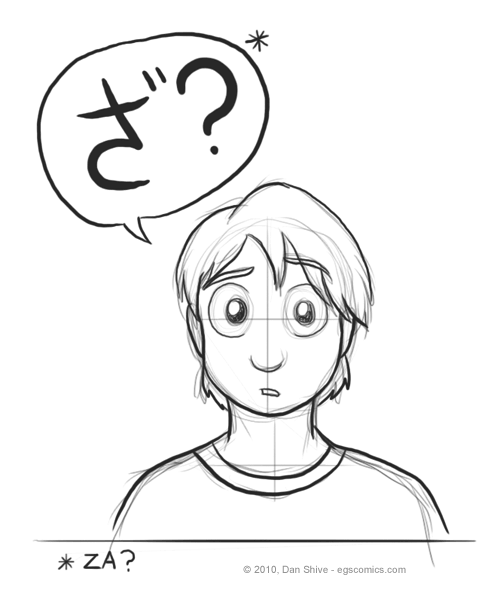 Posted August 24, 2010 at 1:00 am
I was looking through some Hiragana characters, a part of the Japanese writing system, and came across a character meaning "za". This had to be drawn.

This is a joke that I was tempted to include in an upcoming story comic. This temptation lasted less than approximately one second, as it would be the equivalent of tossing up a speed bump in the dialogue of any story comic it would go in, so here is where it goes.

Incidentally, if you clicked on that Wikipedia link on Hiragana (or this one!), you might want to check out the history part of the entry.

It's common to hear that, long ago, only the wealthy learned to read and write. Japanese took it to another level with there being class and gender differences evident in what characters were used in writing, and what's more interesting to me is that the "lesser" form was the more logical (in my opinion) Syllabary one. It makes me wonder if there are more examples of this sort of thing with written languages throughout history.